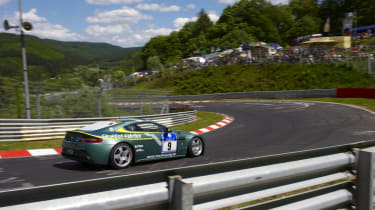 So that was the Nurburgring 24 hour race for 2010. Packed with drama, disasters and success – and that’s just the evo drivers! Here’s a rundown of the winners: In a race of attrition the overall winners were BMW Motorsport with their M3 GT2 which limped over the line with a gearbox on its last legs. Jorg Muller, Augusto Farfus, Uwe Alzen and Pedro Lamy shared the driving duties and Lamy becomes the joint most winning driver of this great race, with five victories to his name. They beat off the Ferrari F430 GTC of the Farnbacher team - a stunning effort in what was the first time a Ferrari has entered the event. Along with P2 overall they also took their class (SP7), ahead of the Chris Harris road-legal Porsche 911 GT3 RS which finished 13th overall and 4th in class.  Aston Martin took the SP10 class with a V8 Vantage, but couldn’t quite claim the big prize in SP8 where the Gazoo Racing LFA held off the Rapide and the V12 Vantage driven a quarter of the way by our own Dickie Meaden. For all Audi’s efforts to win the race outright, they only got one of their seven entries on the podium and it was the less fancied Rostek, Ludwig, Bronzel, Winklehock entry, but they did also scoop SP9. The ultra competitive SP3T class (the one Roger Green and his Lotus Exige was in) was claimed by an Audi TTS.  The Porsche GT3 R Hybrid nearly won the whole thing, failing with just 110 minutes left, but at least they had the honour of winning their class – they were the only ones in it. And speaking of alternative power it was a clean sweep for the gas-powered Sciroccos in the alternative technology class. True, they only had to beat a single Viper to make a clean sweep of the podium, but achievements of Al-Attiyah, Ickx, Depping and Niedwiedz shouldn’t be underestimated; these cars were very quick all through the race. Finally the new Peugeot RCZ notably took the D1T diesel class beating off an Alfa 147 and a gaggle of Golfs and BMWs, while in the bigger-engined D3T diesel category a BMW 330d took the spoils.

THE AFTERMATH: round-up of the Nurburgring 24-hour race highlights

BLOG: Roger tells us about the story that dominated our Saturday night