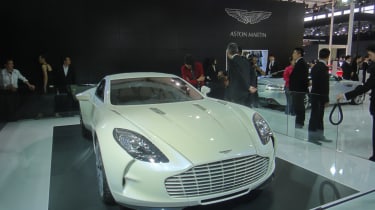 The 14th biennial Shanghai International Automobile Industry Exhibition may not naturally figure against the headline motor shows of Geneva and Frankfurt, but with the unprecedented growth of the world’s biggest car market as a manufacturing and consumer power, it is rapidly becoming one of the most important. To that end, besides the wacky Chinese concepts from the infant home-grown marques, there is a great deal on display at Shanghai which is important to the western car market. The Chinese market, as is well known, favours large, luxury cars, but with as small an engine as possible due to extortionate taxes applied to large capacity imports. Therefore the Chinese market is tailoring exactly to the modern needs of the luxury car industry, in maintaining prestige while simultaneously reducing emissions and consumption. Upmarket crossovers and saloons with frugal hybrid powertrains have been seen from Citroen’s DS5 to Audi’s A3 e-tron. At the other end of the scale, and demonstrating the vast (and lucrative) disparity in Chinese buying habits, Rolls Royce, Ferrari and Bugatti have all exhibited the latest versions of their flagship models, to great interest and acclaim. There’s also evidence of the giant leaps made by once-ridiculed Chinese manufacturers. European levels of build quality and safety are yet to be confirmed but the vast majority look fresh, conventional and viable as consumer products. Expect this to signal the start of a trend, which takes China right to the fore of world auto-manufacturing superpowers.