Despite our fears, it seems the 370Z will receive a successor after all 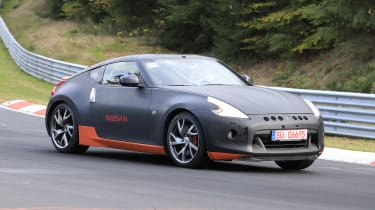 Following whispers of a 370Z successor from Nissan last week, our spy photographers have spotted a mule undergoing testing at the Nurburgring. Though a timeframe for the next car hasn’t been made official, such a development leads us to believe it might be closer than we think...

Z cars have been somewhat neglected in recent times, with the current 370Z in its tenth year and very few real updates having come in its lifetime. Speaking with our sister title Autoexpress, however, the brand claimed a successor wasn’t out of the question.

Despite concerns the 370Z might be the last of its kind due to strict emissions regulations and changes in consumer demand, Nissan’s senior vice-president for design, Alfonso Albaisa, said the brand would, ‘never leave this alone. It’s in our soul. You can feel this in other Nissan designs, like the new Ariya; it’s not just about fuel efficiency, it wants to be driven, for the love of driving’.

When asked if a successor to the 370Z could be on the cards, he replied: ‘It’s easy to imagine. The Z is the car that democratised sports cars back in the ’60s. The current car has been a long time in the dealerships, and so you could imagine Giovanni [Arroba, Nissan’s design boss for electric vehicles] and the designers working on it.’ 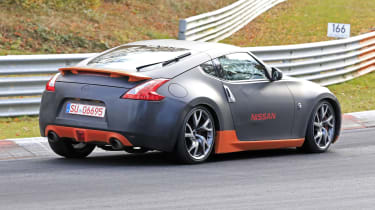 Recent spy images reveal a relatively standard 370Z clad in light camouflage, hiding what appear to be larger air intakes. Whether this is a testbed for an entirely new powertrain and model, or the precursor for a simple 370Z facelift, remains to be seen.

One interesting aspect to note is that Nissan is testing the mule alongside an A90 Supra, giving us a good idea as to where the upcoming model will sit in the market. The current 370Z produces 328bhp and 268lb ft of torque, good for a 5.3sec 0-62mph time and 155mph top speed. Though these numbers have stood the test of time well, they’re a hefty bump away from the Supra’s 335bhp and 369lb ft, enough for a brisk 0-62mph sprint of 4.3sec.

Could ever-tightening emissions regulations and the call for more power bring turbochargers to the Z car? Time will tell...