Between 2002 and 2015 I worked on the Clarkson, Hammond and May iteration of Top Gear, initially based out of a messy and shambolic BBC office in London and a cramped, damp Portakabin at our Dunsfold studio. After a few years we were upgraded to a newer BBC office, which we quickly made untidy and unhygienic, and a larger, even more unsavoury pre-fab in Surrey that contained a variety of ill-matched and unsettlingly stained furniture and a constant miasma of flies. God, they were terrible offices. Some people would walk into these airless, clammy-carpeted cack holes that we had artlessly made to look like student bedsits and reel in horror. But we liked them, and from them we made, I hope, some half-decent television.

I was reminded of our old Top Gear offices a few months ago when I visited the old and now-vacated Jaguar design studio in Whitley, Coventry. I’m not saying that between 1987 and 2019 Jags were designed in a building that smelt so terrible a large bird once died in the corner and it took the staff two weeks to notice, this only happened at Top Gear, but there were similarities in the cramped and slightly chaotic nature of the places. Jag’s main studio was really too small to support the creation of a multi-model line-up, with barely enough space around each clay modelling plate to step right back and admire the evolving design. The far-thinking advanced design wing was inconveniently located in a separate building, as was the colour & trim department. On closer inspection some of the offices appeared to be Portakabins. The viewing yard, so vital in checking how clay models look under natural light, was small and had an inexplicable lawn in the middle of it. I once asked someone from Jag why this was and they shrugged. ‘So we can play football at lunchtime?’ he offered.

And yet, from this endearingly higgledy-piggledy place came the F-type, and the I-Pace, and the original XF, and two generations of XK, and the last XJ, and the C-X75 concept, and (from a glorified garage in the corner of the garden) the Aston DB9. The studio might have seemed a little pokey and faded and awkward to work in, but it turned out some of the best-looking cars in the world. That is until earlier this year when it closed down.

In September Jaguar officially opened its brand-new design centre, a vast, bright, bang-up-to-date facility in the same Gaydon complex as the Land Rover studio and JLR’s expanded engineering offices. It’s an impressive place. The vast, airy studio floor can accommodate 20 clay models at once, each on a perfectly flat and level modelling plate lit by carefully ordered LED light strips – over two kilometres of them in total – and surrounded by 30 multi-axis milling machines where the old place contained just two. Surrounding the main studio floor are bright, spacious open-plan office areas so that exterior and interior teams mingle with colour and trim designers and production engineers to create an open, easy environment in which multiple areas and disciplines within the design process can collaborate. There are VR facilities and an 11-metre digital display wall and a cavernous indoor viewing area and an expansive viewing yard notable for the complete absence of pointless grass in the middle. Maybe they’ll go somewhere else for a lunchtime kickabout. Black rollnecks for goalposts, ooh, isn’t it? 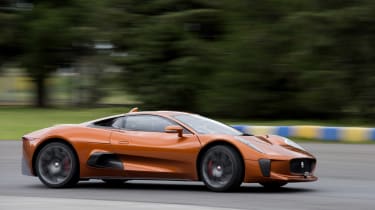 The new Jaguar design studio is exactly the sort of clean, sharp, modern facility any serious car company should have on the eve of the 2020s. And it makes me concerned for the future of Jaguar design. It makes me concerned in the way I’d have been troubled if, sometime around 2009, we at Top Gear had been moved from our grotty, snotty offices into a sheeny media temple of break-out zones and latte machines. We’d have enjoyed it at the time, of course. But maybe it would have made us too comfortable, too soft, too complacent. We’d have felt like we’d made it, rather than continuing to think like scrappy outsiders needing to prove a point. I don’t want to sound like one of those ruddy-faced old bores who claims that a bit of misery ‘never did me any harm’, nor would I automatically assume that from hardship comes worthwhile fortitude. After all, no one deliberately books into the worst hotel in town. But maybe there’s some magic that comes from a working environment with a bit of worn-in dirt and a shabby, indefinable soul rather than one that allows your staff to piss away half the afternoon playing Kerplunk and slouching on beanbags.

I’m sure the Jaguar design staff are delighted with their new studio, as well they should be because it’s very swish. But I look at the fabulous stuff they turned out from the old place and I worry. I worry that the new Jaguar design studio, though it seems like a terrific place to work, might just be a bit too nice.