The hottest Peugeot 207 sports a cleverly turbocharged engine and a handful of styling mods, but is it all mouth and trousers? 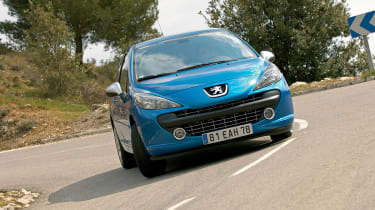 The Peugeot’s up first and for that we’re in the South of France and heading up to the fabulous Col de Vence soon after breakfast. The 207 GTI THP 175 – to give it its full complement of initials and digits – looks good as you walk up behind it. There’s more than a hint of the old 206 WRC car with its wide hips and low rear skirt. Touches that distinguish this as the hottest 207 come in the form of a tailgate spoiler, 17in ‘Pitlane’ alloys, satin chrome door mirror covers and twin chrome trapezoid exhaust pipes. Continue around the considerable perimeter to the front and things get less WRC and slightly more awkward looking. The grille has a sort of Ugly Betty grin about it, its edges seemingly permanently stretched by instruments of orthodontic torture.

Pop the bonnet and you’ll see the THP 175 engine cradled in ample surroundings. It’s the same unit you’ll find in the Mini Cooper S, and it’s a bit of a corker. The THP stands for Turbo High Pressure, and the KKK turbocharger is a twin-scroll item. This apparently means that the exhaust gases from cylinders 1 and 4, and 2 and 3 are paired and then passed through scrolls to control the flow to the turbine. The result is that it starts generating boost from just 1000rpm, which in turn helps response. As on the Mini, there’s also an overboost facility that delays the opening of the wastegate, allowing pressure to swell from 0.8bar to 1bar and increasing torque by an extra 15lb ft as a result. All in all, a very clever piece of kit.

Unlike the Mini, the GTI makes do with just a five-speed gearbox, but it’s far from a handicap. The ratios are well-spaced so that fifth is a genuinely unstressed ‘top’ and the other four combine with the engine’s flexibility to provide all the options you could ever need. It makes you think that the now seemingly ubiquitous six-speed ’box is probably more of a marketing tool than an engineering necessity.

Climb inside and you’re welcomed by the sculpted embrace of a chunky leather and Alcantara bucket seat. Swing the door shut and you’ll find yourself sitting a long way inside the car. This, combined with a jumbo-sized steering wheel, gives you a curious Alice In Wonderland feeling of being a child in an adult’s car. For the first time in hot hatch history, parking sensors really ought to be standard, although this is probably the price you pay for a five-star NCAP safety rating.

The dashboard’s plastics and design are all inoffensive, but in an age of Piano Black finishes and mood lighting it’s a less sophisticated ambience than its competitors’. The speedo is, however, a sensible size and nobody is going to care a fig how it looks either inside or out if it drives like a modern-day 205…

The first quarter of a mile leading out of the hotel could do with a new layer of tarmac and the 207 patters and fidgets away, transmitting every protruding pimple up through the seat and indicating the stiffer suspension over its little brother, the GT. The road smoothes out as it gently snakes in the direction of Vence and the col beyond. Already, however, things aren’t looking too good for the five stars.

The 207 is a conspicuously unmechanical car. The pedals feel floppy and although each gear snicks home well enough, the gangly throw across the gate is a bit vague. The enormous steering wheel doesn’t exactly flood information through to your fingertips either, instead twirling away as though it’s fly by wire.

Out of Vence, down to second, nail the throttle, up to third and overboost pulls the GTI eagerly towards the mountains, exhaust note bouncing off the rocks. The first couple of miles are fast with quick third- and fourth-gear bends. Turn-in proves rapid, loading the chassis, which then carves through with impressive grip. Lift off mid-corner and the back end instantly tightens the line, adding to the keenness.

But as the caramel-coloured road begins to twist ever tighter, the 207 starts to stumble. For a start, with those distant extremities it’s a hard car to place. This means you find yourself tending towards the middle of the road to relieve the nagging fear that you’re about to clatter the nearside mirror into a rockface. Fine, until you find another car coming the other way, particularly if it’s another 207 with an anxious driver.

Into tighter corners the initial bite remains strong and you can even feel the inside rear wheel begin to hang in the arch. But as soon as the electric steering has any real lock applied, you lose all sense of what the front Bridgestones are doing, making the rest of the corner a very vague series of stabs based entirely on what you can see through the windscreen.

As the road straightens after the apex and you let the lock off, the rim whizzes back towards the straight-ahead right up until the last few degrees when it suddenly turns sticky again and stops self-centring, thereby threatening to punt you off the side of the mountain if you don’t do something a bit sharpish. There’s also a curious under-damped motion from the rear of the car, which seems to continue gently moving for some time after a corner, and if you get the front wheels spinning then frequently the only way of knowing is by the winking ESP light.

I spent all day ragging up and down the iconic Monte stage, desperately longing to unearth a glimmer of the genius that I’d hoped for. Underneath it all there was a chassis capable of quite exciting things, but it always felt tantalisingly out of reach because the primary controls leave you feeling like you’re driving a pillow. I searched the entire dashboard in case I was missing a ‘Sport’ button that would miraculously tense every sinew, but the search was in vain. The brakes never wilted and that engine never lagged, but sadly there was no escaping the fact that the 207 GTI is resolutely not a five-star car.