An unsurprising addition to the 508 range, the SW estate aims to prove style need not always be sacrificed for practicality 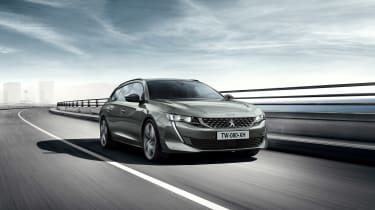 Peugeot’s stylish new 508 saloon has just received a more practical sibling in the form of the Peugeot 508 SW estate. Designed to rival cars like the Vauxhall Insignia Tourer, VW Passat Estate and Skoda Superb Estate, the Peugeot is hoping to offer a similarly practical estate car, but in a sleeker form.

The 508 SW is off to a good start in that respect, too, pairing the saloon’s attractive front end with a sleek, yet muscular, rump. Peering out of the black bar across the tail are the 508’s distinctive three-dimensional rear lighting elements, paired with an aggressive lower bumper and exhaust pipe treatment. The 508 looks sleeker and lower than its predecessor, largely because it is, 60mm in fact.

Peugeot has been on a roll with interiors lately, and the 508 SW should be little different, suddenly even the interiors of premium rivals look a little dated and unadventurous in comparison. How the interior will actually function is another matter though. Space is said to be unaffected by this SW’s reduced roofline, chiefly due to a lower seating position in comparison to the previous model.

As with the saloon, engines will be limited to four-cylinder units, the selection made up from two diesels, and a turbocharged 1.6-litre petrol engine in 178bhp and 222bhp forms. A plug-in hybrid model pairing a petrol engine and electric motor will arrive in the second half of 2019. All engines will be matched to an 8-speed torque converter automatic gearbox aside from the entry-level diesel.

The new 508 may have lost its admittedly low-selling six-cylinder variants, but the move to the same platform as the 308 does yield a useful 70kg weight saving over its predecessor. Switchable dampers are available on higher specification GT models.

Destined to reach UK showrooms in January of 2019, the 508 SW may not be as on-trend as those savvy SUVs, but will likely prove to be nicer to drive, cheaper and more practical.