Available with a petrol or diesel engine in hatch or estate form, the Insignia GSi has something for everyone – maybe... 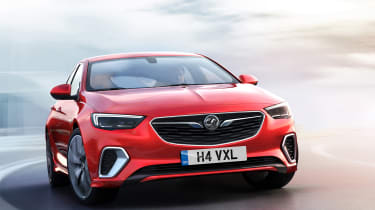 Pricing of Vauxhall’s Insignia GSi has been announced ahead of the car’s arrival at dealers in March of 2018. Available in Gran Sport and Touring forms, the GSi will be available with petrol and diesel engine options starting from £33,375.

Vauxhall initially revealed the Insignia GSi at the Frankfurt motor show earlier this year, but at the time the car was only due to be available with a 257bhp 2-litre four-cylinder petrol engine. Now Vauxhall has confirmed that powerplant will be joined by a 207bhp bi-turbo four-cylinder diesel too. Both engine options are connected to an eight-speed automatic gearbox feeding an all-wheel drive system featuring a ‘twinster’ rear differential, giving the GSi real torque-vectoring capability, just like a Focus RS. 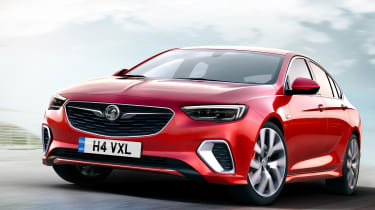 In terms of competition, the Insignia will have to overcome the Skoda Superb 280TSI, also running a high-output four-cylinder petrol engine and all-wheel drive. Equivalently priced, the Skoda is lacking when it comes to performance paraphernalia, but does feature the Volkswagen Group’s formidable EA888 petrol engine to compensate.

So keen has Vauxhall been to ensure the new GSi drives well, it’s developed the car at the Nürburgring. It’s therefore no surprise that Vauxhall insists that the GSI is a genuinely fun car that can be used on track, too. Four driving modes would back that up – Standard, Tour and Sport remain the same as in other iterations of the Insignia, but the GSi receives a fourth mode titled Competition. Here the traction control is switched off, allowing for greater rates of yaw. Whether off really means ‘off’ remains to be seen.

Vauxhall has also provided the new GSI with various visual upgrades aimed at making the car look sportier and more aggressive. The air intakes and exhausts are now chrome-lined while the rear end receives a new spoiler aimed at aiding performance and not just looks. Inside the driver benefits from Vauxhall’s own sports seats and a new leather trimmed sports steering wheel. Aluminium pedals also come as standard. 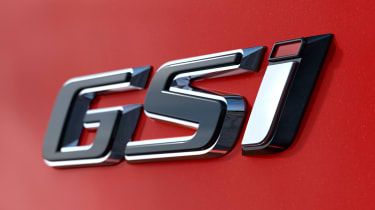