If any car knew how to do ‘mainstream’ it was Vauxhall’s just superseded Insignia, a vehicle of such perfectly-judged mundaneness it was possible to drive one and have no recollection of the event, memory untroubled by conspicuous excellence or irksome flaws. And I don’t mean this as a bad thing.

For a good few years after its 2008 launch, it was a particularly comfortable market fit – a sprawling model range that understood every angle of average, catering for fleet and company car audiences that cared more about putting miles under wheels as painlessly as possible (albeit in reasonable refinement and comfort) than dynamic flair, classy fittings, cutting edge tech or straightforward, must-have desirability. Things were simpler then. 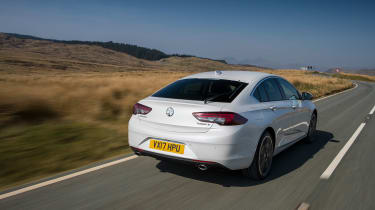 But now ‘premium’ is the new mainstream by proxy and where once Vauxhall’s only real D-sector concern were the Ford Mondeo and Volkswagen Passat, these days it must battle C-class Mercs, 3 Series BMWs, Audi A4s and any number of why-make-do-with-a-boring-hatchback crossovers and SUVs.

The answer to all of this is the new larger, sleeker, classier, kit dense and cheekily-named Insignia Grand Sport. The range has been slimmed down, but there’s really only one model that interests us, the £27,710 2.0-litre, 257bhp Elite Nav 4x4, which comes with an eight-speed automatic gearbox, full-time four-wheel-drive and tops out the range. Well, it’s as Grand Sporty as it gets for now.

The Insignia Grand Sport is longer, wider and sleeker than the car it replaces but weighs up to 175kg less model-for-model, 60kg of which is down to the body alone. Impressive, too, is the very slippery 0.26 drag factor partly won by the coupe-like profile. Boot volume has suffered a bit: 490 litres is 40 down on the outgoing model’s but there’s bags of interior space with Skoda Superb-rivalling rear legroom.

Aesthetic appeal, if not potential ride quality, is certainly enhanced by the standard 20-inch alloys, but then the deal with this flagship model seems to be to leave no box un-ticked this side of the kitchen sink – not exactly an original tactic in the bid to blur the allure of more sparsely equipped Mercs, BMWs and Audis, but you can’t blame Vauxhall going for broke this time, or for the appealingly techy bias. 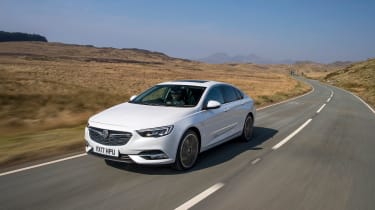 Despite the larger wheels and boots and electronic adaptive damping with ‘Sport’, ‘Normal’ and ‘Tour’ settings, spring and damper rates are the same across the range with no concessions for this sportiest Grand Sport. But the compact four-wheel-drive system does incorporate a novel method of torque vectoring (speeding up the outside wheel rather than braking the inner one to quell understeer) and there can be no doubting beefiness of a 2.0-litre turbo four with 257bhp and 295 lb ft of torque. Vauxhall claims 0-62mph in 6.9sec and top speed limited to 155mph.

For the most part, very pleasant. Sporty in a grand way? Not even in a minor way. This isn’t to say it doesn’t cover the ground swiftly. You might even call it effortless. Engine and transmission work seamlessly together with commendable hush and an always adequate amount of rush following the merest hint of turbo lag. Nothing to get the pulse racing, though.

Certainly not enough to overwork the well-shod all-drive chassis which majors on grip and stability rather than finesse and involvement. The electric steering isn’t overly light but it isn’t over-endowed with feel either, though it is quite direct and the nose turns in keenly without the torque vectoring being in any way obvious. 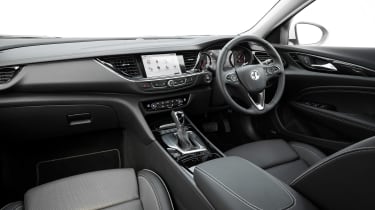 Basic body control is pretty good with the adaptive suspension in ‘Normal’ but the ride becomes fidgety over broken surfaces, more prominently so if you switch to ‘Sport’, though this is definitely the preferred setting for smooth roads if you want to press on. Seats, driving position, visibility, control layout and overall build and finish are really good, just lacking that touch of class that separates the true premium products from the wannabes.

This flagship Insignia Grand Sport is aggressively priced and offers a lot of well-made and extraordinarily well equipped car for the money. If space, comfort, refinement and kit mean more to you than powertrain personality and dynamic acuity, there’s a lot to like – certainly more than with the pricier versions of the outgoing model.

But if you want genuine engagement and fun behind the wheel, you don’t even have to look as far as the usual German suspects from Mercedes, BMW and Audi. A Ford Mondeo or Mazda 6 will give you that. The new Insignia gives you more than ever before, but it’s between just as many stools.