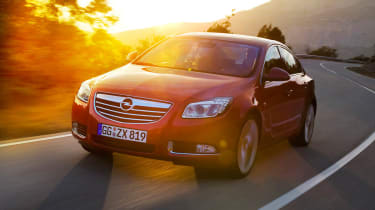 What is it?   Not exactly a car to set the world alight, but instead a revised version of the big-selling Vauxhall Insignia, fitted with a 1.4 turbocharged petrol lump up front. Essentially replacing the old naturally aspirated 1.8 in the range, it’s priced from £23,015 in the sportier SRi trim tested here.   Technical highlights?   Using the same 1.4-litre turbo engine from the Astra hatch, the latest Insignia now features a start/stop system, boasts sleeker aerodynamics on the undertray, and the 17-inch alloys are shod with low-resistance tyres. Other concessions to efficiency include a new ‘REPS’ rack assisted electric power-steering setup, which replaces the old hydraulic system for improved fuel economy.   What’s it like to drive?   As you’d expect, the little turbo is considerably better than the ancient engine it replaces. It’s hushed and refined when you’re on the motorway, and mid-range torque is impressive considering it’s small capacity.

There’s a perky charm to using an eager, revvy petrol unit in this type of car, but it can start to run out of steam (and start to boom noisily) once you explore the higher reaches of the rev range.

The new electronic power steering is linear and well weighted, and somewhat surprisingly, it feels better resolved than the old hydraulic setup. The eco tyres still generate a considerable amount of grip, and thanks to the lighter engine the Insignia feels quite nimble, but it’s a capable rather than compelling package.

With 138bhp on tap, the new engine rarely feels short of pace, but it’s smooth nature and relatively low emission, the new diesel engines – one of which that will do 0-62mph in 8.9 seconds – are likely to remain the bestsellers.

Ride comfort is extremely impressive, and while there’s some unsettling rebound from the rear, it’s impressively cosseting, with wind and road noise is well suppressed.    How does it compare?   It’s still not quite as sharp to drive as the current class best - the Ford Mondeo - and at this price, it also knocking on the door of some serious premium competition in the shape of the BMW 3 Series. The Insignia certainly isn’t a bad car, but this small turbo isn’t likely to be the first choice for enthusiastic drivers.   Anything else I need to know?   This set of mechanical changes is only the start of the Insignia’s mid-life revamp, so if you want to get your hands on one that both looks and drives differently, then it’s worth waiting until next year for the cosmetic updates too.