The iconic Martini Racing livery could become available to the wider Porsche range, as modelled by a 911, Cayenne and Panamera 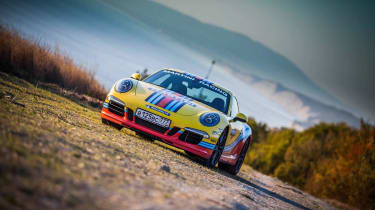 The iconic Martini Racing livery from the heyday of Porsche’s sportscar racing era has been applied to some of its current road cars for a special photoshoot in Sochi.

Having just played host to its first Grand Prix, the Russian city saw a 911, Panamera, Macan and Cayenne all flaunt the famous Martini blue streaks in front of the camera, suggesting the designs could be offered in the wider Porsche range as options in the near future.

In this case the SUVs and four-door Panamera stuck with traditional colours, whilst the 911’s wrap featured a slightly more vibrant design than normal with its yellow and red base.

Currently, the only cars available with Martini colours from Porsche showrooms are the 918 Spyder and 911 Carrera S Martini Racing Edition, both of which are limited in production to 918 and 80 units respectively.