Whether it's the base Cayman or the GTS, the 718's fine handling outshines its disappointing engine 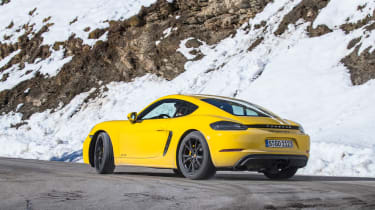 The controversial move to do away with the Cayman’s sublime, naturally aspirated flat-six may be enough to make enthusiasts wince, but it’s been justified by the car’s on-paper performance.

Porsche claims that a manual 718 Cayman accelerates from 0-60mph in 4.9sec, 0.8sec quicker than its predecessor. Opting for the Cayman’s seven-speed dual-clutch transmission trims a further 0.4sec off the time with Sport Plus engaged. 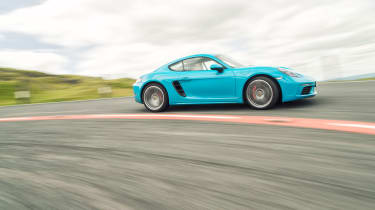 When equipped with the PDK gearbox, we have timed the 718 Cayman S going from 0 to 60mph in just 3.9sec – 0.1sec faster than Porsche’s claimed figure. It feels brutal as the launch control holds the revs at 6000rpm before abruptly releasing the clutch as you take your foot off the brake. Despite the high revs – most automatic launch control systems hold the revs at 3000 to 4000rpm – the rear tyres find an incredible amount of grip and the Cayman launches away cleanly.

Despite having one extra gear, the PDK cars don’t reach a higher top speed than the manual equivalents, and the 718 Cayman reaches 171mph while the S hits 177mph.

As you’d expect, the more powerful GTS is the fastest of the range. Equipped with the semi-auto PDK ‘box, the GTS hits 62mph in 4.1sec – 0.1sec faster than a Cayman S with Sport Chrono and the same transmission.