The new Porsche 911 GT3 is yet to hit our roads, so Exclusive Manufaktur has something to tide you over until its arrival 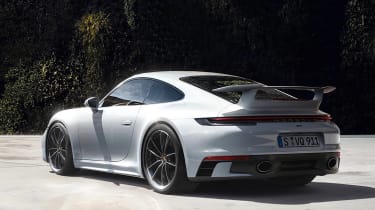 Following the launch of Exclusive Manufaktur options on the 992 911 last year, Porsche is now offering an Aerokit alongside its SportDesign additions. The option allows buyers to set their car apart from the rest, whilst also adding marginal improvements in performance.

First teased in early 2019, the Aerokit is available on all coupe variants of the 992 911 Carrera, applying a new front splitter and most notably, a rather large fixed rear wing, not dissimilar to one you’d expect to find on a GT3 – buyers can opt for either a high-gloss black, or matching body colour finishes.

Designed in Weissach, the kit might not create the 155kg of downforce seen on the current GT3, but tests at VAG’s Nardò facility ensured it ‘reduced uplift’ both front and rear. Though it’ll set you back in excess of £4000, if a bewinged 992 911 is what you’re after, it’s currently your only option...

Sitting alongside is the SportDesign package, a near-£3000 option that swaps the standard front and rear bumpers for more aggressive counterparts, aiding in cooling whilst altering aesthetics. A separate £749 option is SportDesign side skirts, adding further aggression, with a lightweight carbonfibre roof, darkened LED headlights and Porsche crests in the seat headrests also available through the programme. 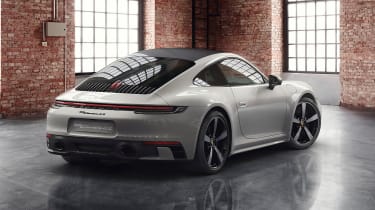 Not only does Exclusive Manufaktur allow for the specification of questionable components, it also allows customers to choose options not ordinarily available on the standard car. Available on almost all Porsche models is the ability to specify body-coloured wheels, for example – yes, that does mean you could have bright red wheels should you desire.

The programme saw its beginnings in around 1950, when a 356 was covered in faux fur. Since then, the programme has allowed customers to realise a variety of interesting creations, from simply painting a 911 in the colour of their front door, to creating entirely new, custom components to stand out from the crowd.