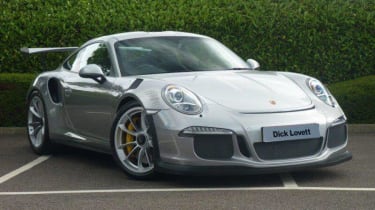 Dick Lovett’s Swindon Porsche Centre showroom has advertised the UK’s first used 911 GT3 RS for a staggering £295,000. The 141-mile old GT Silver car is the only one currently on sale in Britain, and as such, is advertised at 225 per cent of its original list price.

That’s an increase of £163,704, which, even for a car Henry Catchpole says is ‘very much worthy of its RS sticker’, is steep. But Paul Smith, Dick Lovett Swindon’s business manager, reckons the car’s price is justified.

‘This is the only 911 GT3 RS currently on sale in a UK showroom, so the price is such because there are no other 911 GT3 RSs available,’ Smith explains. ‘Though we have no hard evidence, it is rumoured that even RS build slots are selling for £100,000 over list price, but unlike them, this is a car you can actually drive away today.’ 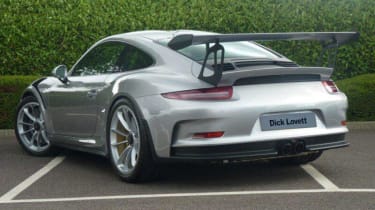 Aside from its rarity, the car’s value is certainly helped by its immense capabilities. With a Porsche Motorsport 4-litre flat-six that produces 493bhp and 339lb ft of torque out back, it’s capable of accelerating from 0 to 62mph in a claimed 3.3sec. It’ll also power on to a quoted 193mph top speed, but it’s the GT3 RS’ agility and hyper-communicative chassis that secures it a place among evo’s all-time favourite drivers’ cars.

Dick Lovett’s car comes without the Clubsport Package, and as such, doesn’t feature a rear roll-cage and fire extinguisher. But buyers needn’t worry because as Henry confirmed after his first drive, they really only ‘add a fair chunk of weight’. It also features sports bucket seats, optional carbon ceramic brakes (a £6,258 option) and a front-axle lifting system. 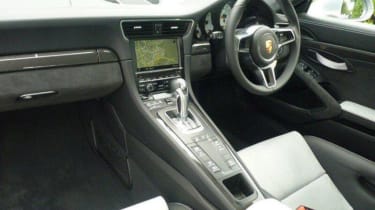 However, Smith does admit that the arrival of the 911 GT3 RS and the fact that several 911 GT3s have landed on the second hand car market at once has resulted in a slight decrease for their prices. ‘But as soon as enthusiasts get their hands on these used GT3s, those prices will come up again.’

Watch the Porsche 911 GT3 RS in action below: