Porsche’s GT2 RS too wild and the GT3 too mild for you? Try the new GT3 RS 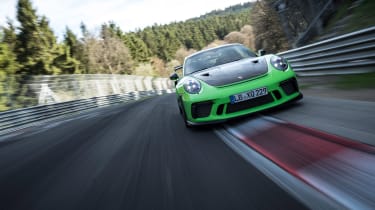 With the Geneva motor show a matter of weeks away, Porsche has revealed the new 911 GT3 RS ahead of its world debut at the Swiss show. Mixing the naturally aspirated performance of a regular GT3 with the extreme aerodynamic looks of the turbocharged GT2 RS, the new GT3 RS will go on sale later this year costing £141,346.

Six cylinders, four litres, 513bhp and not a turbocharger in sight, the new GT3 RS follows the same path as its predecessor but builds on those credentials with incremental increases across the board. It’s quicker, albeit only a tenth of a second quicker to 62mph at 3.3 seconds, more powerful by 20bhp, has the slightest torque advantage and we expect it to weigh in the region of 1400kg. It also generates more downforce, its PDK transmission shifts quicker and the chassis has been sharped further still.

That four-litre motor not only develops 513bhp and 346lb ft of torque, but peak power now arrives 200rpm higher in the rev range at a howling 8450rpm. Amplifying the flat-six’s tone is a new titanium exhaust with 91mm diameter tailpipes. The power and torque increases have been achieved by fitting a new DME engine management system and improvements to the air intake and exhaust systems. 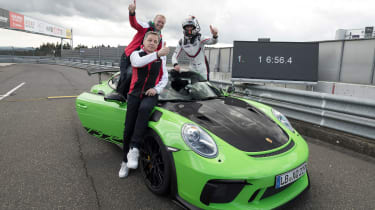 Along with faster shifts for the PDK transmission, the final drive is also eight per cent lower than its predecessor (although the larger wheel and tyre combination eradicates any performance advantage) and there’s a bespoke drive bearing for this RS, too. An electronically controlled limited-slip differential with torque-vectoring is standard, so too rear-wheel steering and dynamic engine mounts.

The big focus for Andreas Preuninger’s team for the GT3 RS was its aerodynamic performance and suspension. The latter sees the majority of the GT2 RS’s chassis components being transferred over and adapted accordingly, with the spring rates double those of the previous gen car. Rose-jointing is used throughout bar for the rear steering, but have also been further modified to improve agility. The PASM dampers have also been recalibrated, with the new GT3 RS having been further tuned for tactility and precision over the day-to-day comfort and usability of a regular GT3. Ceramic brakes are optional, the 265/35 R20 and 325/30 R21 Cup 2 tyres feature a bespoke compound, and the forged wheels are 100g lighter than those of the old GT3 RS.

A 911 GT3 RS has never been a car that blends in and this latest generation is no different. Even ignoring the Lizard Green paintwork of the launch car, this latest iteration is a riot of splitters, wings, air intakes and aero-slats. Beneath the wild body, which includes the GT2 RS’s rear wing that’s positioned higher than before, is new under-body aero that includes a new rear diffuser.

A deeper front splitter, larger air intakes and cooling ducts in the front bonnet manage the car’s front aero requirements, with the slats cut into the top of the front wheel arches allowing turbulent air within to escape. Larger openings in the rear bumper are designed to draw turbulent air through rear arches as quickly and efficiently as possible. The GT2 RS’s magnesium roof and thinner side and rear glass are also included. 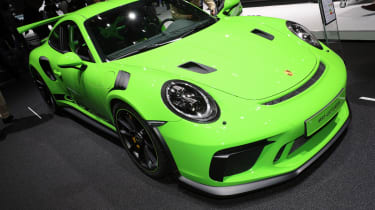 Inside you’ll find every piece of expected GT3 RS furniture. There is a pair of carbon-shelled bucket seats, storage nets in the doors in place of the traditional bins, and a cord as a door handle. The steering wheel is wrapped in Alcantara, and the Clubsport package includes a half roll-cage, fire extinguisher and six-point harness.

Opt for the optional Weissach package, as 90 per cent of the GT2 RS customers have, and you get a carbonfibre front bonnet and anti-roll bar, a titanium half-cage and a set of magnesium wheels. Although the demand for the Weissach pack on the GT2 RS means those GT3 RS customers who also order it – or just the magnesium wheels – will have to wait longer for their cars after the first deliveries are made later this summer.