Think the 911 GT3 RS is Porsche's 911 flagship? The performance of the Turbo S may make you think twice 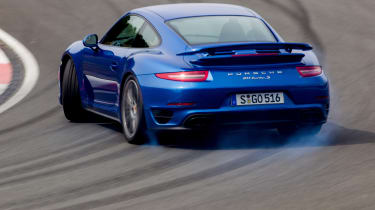 Wherever possible, evo includes track testing and lap times when testing performance cars. We certainly don’t decide verdicts based on track behaviour alone, unless of course a car is designed as a dedicated track vehicle or we’ve only been able to drive a car at a circuit.

But many of our readers will take their performance cars on track days and perhaps even compete at race events – so it’s hugely important that we’re able to report on a car’s characteristics on the limit. Plus, it’s always interesting to see how much faster or slower a car is next to its competitors – and plenty of fun.

Given a sunny day at the Anglesey circuit in north Wales, there are few better ways of enjoying supercars like the Porsche 911 Turbo S. And the new model is faster than ever, as you’ll see in the video.

In fact, it claims the scalps of more than a few significant competitors, including those from Italy and Japan. 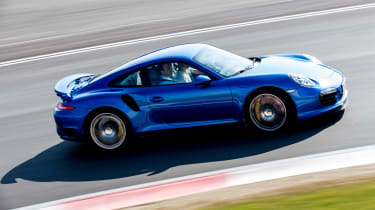 Wearing the famous 911 HUL number plate – used on 911 Turbo models from Porsche’s press fleet for decades – the Turbo S set a blistering time around an unseasonably warm Anglesey. In fact, in the hands of Jethro Bovingdon it’s just 1.2 seconds slower than Porsche’s own 918 Spyder – a hugely expensive hypercar sitting far above the Turbo S in Porsche’s pecking order.

But the lap time still doesn’t tell the whole story. 911 Turbos have gained a reputation for being less exciting than GT3s or even regular Carreras – a bit flabby, a little muted, power over finesse.

In reality, the Turbo S is a revelation, more delicate than rivals such as Nissan’s GT-R and as entertaining as it is fast. That we timed it to 60mph in 2.6 seconds is almost incidental…

Watch the video to see how we rate the Turbo S on track.