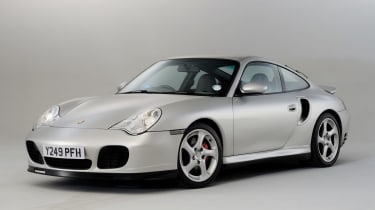 The 911 Turbo is truly the stuff of legend, offering genuine supercar performance in a compact and practical package. In its early versions it was also infamous for its unforgiving handling. But the 996 version that appeared in 2000 was a different sort of animal. With four-wheel drive, a water-cooled engine, a smooth new bodyshell and radically updated cabin, it was a thoroughly sophisticated, all-weather, all-road supercar. And though it went out of production in 2005, in real terms it’s still as quick as anything on the road. It’s also a fantastically appealing second-hand buy, provided you’re aware of the potential pitfalls.

Compared with the previous 993 model, the 996 represented a virtual redesign. Cosmetically, it moved Porsche on in many significant yet subtle ways: the lines were smoothed out, the windscreen was raked right back, the cabin was roomier and the facia finally looked like it had been styled, though some preferred the classic Porsche look. The structure managed the neat trick of being 45 per cent stiffer yet lighter than the older model. And the early 911 handling quirks were further ironed out. Unless you were absolutely determined to drive like an arse, the 996 Turbo was as surefooted as any 190mph car. In short, it was the first of the modern 911 supercars.

The 996 generation was a particular milestone in being the first water-cooled 911, water cooling allowing an engine redesign that included four valves per cylinder, which achieved higher power outputs and much better fuel economy. But we need to clear one thing up immediately. Although the Turbo is water-cooled it’s not the same engine that’s in the regular 996s. The turbo engine can trace its ancestry back to the old air-cooled units and is directly related not only to the 996 GT3 but also the GT1 racer (3.2 litres and 600bhp!). The other 996 engines were a completely different design and had gasket problems that could lead to catastrophic failures, but not so the Turbo. This engine is very strong and can be tuned up to well over 500bhp if the fancy takes you.

As standard the Turbo had 420bhp at 6000rpm. In 2002 you could order the X50 upgrade package, which pushed the output up to 450bhp with different turbos, intercoolers, ECU tune and a reinforced gearbox. The 2002 model, sometimes known as the mk2, also saw body revisions which increased stiffness, improving handling and crash safety.

In 2003 the flop-top arrived, its reinforced B-pillars and other mods raising the weight by 70kg though it still posted near identical performance figures. The swansong was the 2005 Turbo S model, which had the X50 set-up as standard and also had ceramic composite brakes (PCCB) which work best when hot, making it ideal for trackdays. The six-speed manual is a typically good Porsche box but many Turbos were sold with the Tiptronic semi-auto. Fuel economy is good for such a rapid car – high-20s on a gentle run is not unheard of, but most owners average around 20mpg. So that’s the 996 Turbo, the sensible supercar! Now here’s how to find a good one.

Mid-range punch was always the 996 Turbo’s party trick and while 420bhp might not sound that impresive today when there are saloons and estates around packing considerably more, it still feels seriously rapid. It has that instant thrust that compresses internal organs against the back of the seat and draws involutary whoops of delight and a flow of power of power that just keeps on coming. The chassis and brakes are a perfect match for the engine’s performance, so invariably you’re always travelling faster than you think you are.

From the helm the Turbo may lack the intricate detailing provided by the GT3 of the interface between rubber and tarmac but it’s still impressive by any other standard, and the ride is taut whist retaining enough suppleness for long journeys to remain comfortable. With four-wheel drive and the engine slung out the back both grip and traction are incredibly strong, so much so that after a short drive you feel completely invincible.