It might be an evo favourite, but Stuttgart’s sports car hasn’t always won on the day 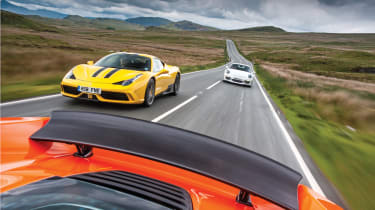 We’ve long been fans of the Porsche 911. No fewer than 16 have featured in evo Car of the Year since 1998 - nine have won the title – and many in between have grabbed the attention (and quite often hearts) of evo’s road testers.

But while RS badged cars rarely disappoint – we’ll never forget the intricately detailed steering of the 996 GT3 RS or venomous behaviour of the ‘widow maker’ 997 GT2 RS – lesser models have sometimes been less spectacular. And with arguably the toughest batch of rivals up against it, the current 991 911 has struggled more than most.

So below, we remember five times that the latest 911 hasn’t quite hit the mark. In short, these are five cars that have beaten the Porsche 911. 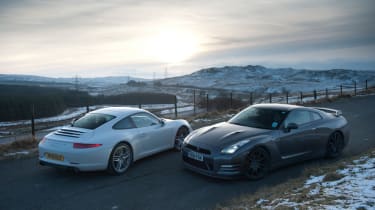 It’s September 2014 and the location is North Wales. The 911 is a Carrera in S-spec, equipped with a PDK gearbox and an optional Powerkit upgrade. This ensures it matches the power output of its fiercest rival for the day, the Audi R8. As a 424bhp R8 V8 S-Tronic, the Audi is actually a little down on torque - it producing 317lb ft compared to the 911’s 324lb ft.

Straight-line performance couldn’t be much closer – the Audi can accelerate from 0 to 62mph in a claimed 4.3sec and tops out at 187mph, the Porsche does the same a tenth of a second and 3mph faster. Impossible to split them on paper, but on winding Welsh roads - where steering feel and balance is desired - the mighty 911 will surely reign supreme? Not quite.

‘The front end no longer feels light and the rear no longer pendulous to turn in,’ explains road test editor Dan Prosser. ‘No matter how hard you drive it, it rarely gives the impression that you’re extracting all of its performance’. Even though we’ve already met the 991 several times before, we're surprised at these downfalls.

The R8, on the other hand, is utterly sublime. ‘On the rougher stuff it rides with such fluidity and with a cushioned, absorbent quality over lumps and bumps in the default suspension mode, but it never gets floaty over crests and undulations,’ comments Prosser. ‘Tip the car into a corner and the front end bites hard before the weight settles evenly on both axles. This is one of the great modern road car chassis’.

In short, the malleable, less skittish R8 is more enjoyable to drive. So while the 911’s outright pace is clear – evident with a lap time around Anglesey that’s 2.5sec faster than the R8 – on the road, on this day, the R8 is the drivers’ choice. 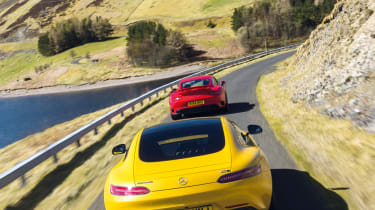 ‘Sort of light-grey stone, possibly with a hint of flint – that’s the construction of the wall that I nearly hit as the 991 very suddenly becomes a 911.’ Features editor Henry Catchpole is no stranger to going sideways, but on a cold, snowy morning, even he is surprised to find the 911’s rear-axle attempting to take the lead.

‘I pick another, slightly less precarious corner…once again the 991 gets sideways, once again without any real tactile warning, even though I’m really looking for it this time.’ Like Prosser above, Catchpole struggles to read the 911 – which this time is in 394bhp 3.8 Carrera S specification – confirming that despite its outright pace, the 991 chassis is lacking in feedback.

But the biggest surprise comes when a Nissan GT-R, here in 542bhp MY2012-guise, is able to dismiss claims of being too electronically-assisted and too heavy (it weighs a hefty 1730kg to the Porsche’s 1395kg), by impressing not only with its savage performance but also a throttle adjustable chassis.

‘Fastest line, stick with the throttle, ride the short slide, flick a gear, attack, attack, attack. Over a crest, dive left, grip changes but trust the car as a fractional understeer switches instantly to fractional oversteer underneath you. It’s a deeply thrilling feeling…’ Catchpole is immediately grabbed by the GT-R’s frantic but highly involving character.

Internet-battles are often rife with claims that Nissan GT-Rs are numb, blunt tools designed to cover ground at immense speed but without personality. 911s, on the other hand, are supposed to be a true drivers’ car, talking to their driver throughout. But, just like Prosser above, on this day Catchpole’s experience couldn’t have been more contrasting.