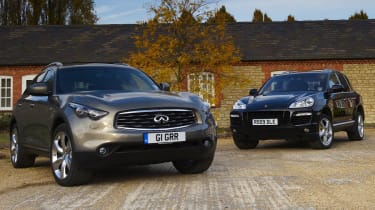 Evo Towers has been besieged by sporty SUVs these past few weeks. Why? Because I fancied trying out some of the Cayenne’s main rivals before our time with the big Porsche runs out next month.

The first to arrive was the Infiniti FX50S, a car that is apparently doing reasonable business in the US and is expected to do well over here too. First impressions aren’t great. If you think a Cayenne or Q7 is OTT then wait till you clap eyes on one of these. Its front end is so cartoonishly aggressive, we could only bring ourselves to photograph the rear. Things get better when you drive it, thank goodness, because under the bonnet of this range-topping version of the FX is a 385bhp 5-litre V8 that delivers a 5.8sec dash to 62mph and a (limited) 155mph top speed. And as you might expect of a car from Nissan’s answer to Toyota’s Lexus, the powertrain is buttery smooth, the gearchanges from the seven-speed automatic ’box barely perceptible.

It’s the handling that really lets the Infiniti down. With no active roll control available, the FX50S wallows far more than the Cayenne, while the giant wheels thump around whenever they hit a ridge in the road. Another disappointment is the interior. The FX might seem a big car on the outside, but on the inside it certainly isn’t. The rear seats aren’t great for adults, while boot space is pretty limited too, so the Cayenne easily wins the space race. In fact, the only ace the Infiniti holds over the Porsche is on price, as at £53,800 it significantly undercuts the £75,800 Cayenne Turbo, and it comes with way more equipment as standard, too. I still wouldn’t have one, though.

Next up was the new Range Rover Sport Supercharged. Recently radically updated, the Sport is a much tougher competitor for the Cayenne Turbo. Its interior simply blows the Porsche’s away, for starters, with clearer graphics and great materials. The Sport is far better at pottering around town than the Cayenne is, too, thanks to a throttle action and gearbox response rate that are both better resolved, although some might find the steering a little too light at urban speeds. It’s only when you start to press on that the Cayenne begins to gain some ground back.

Both the Range Rover and the Porsche are big, heavy cars, but it’s the Rangey’s weight problem that is the most noticeable. In the Cayenne, the terrific (although admittedly optional) carbon-ceramic brakes dispose of speed in a way that appears to defy physics. I know I initially complained that they are a bit grabby, but that was before I’d experienced the way they can slow the 2355kg Cayenne Turbo from really big speeds. You’re simply not aware of the weight you’re trying to haul up – unlike in the Range Rover. I was amazed to discover that the Rangey is a full 235kg heavier than the Cayenne, which might also explain why, when pressing on, it’s even better at downing a gallon of unleaded…

But the Range Rover again exposed the Porsche’s high list price – at £61,995 the Sport Supercharged is nearly £14,000 cheaper than the Cayenne Turbo. That would probably be enough to swing it for some people, but the fact remains that the Cayenne is still the better road car in pure dynamic terms, which is why it wins this comparison.