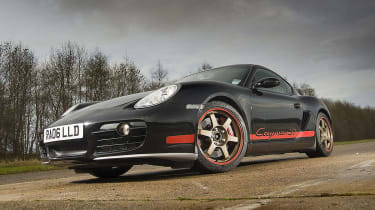 Car-themed ‘what ifs?’ are something of a petrolhead’s disease. They’re a great way of passing the time, and they come no more controversial or topical than this favourite. ‘What if Porsche whipped out the Weissach pencil- sharpener and really went to work on the Cayman?’ If the rumours of a factory Cayman Club Sport are true, it seems Porsche may soon provide us armchair engineering fantasists with an answer. In the meantime there’s the Autofarm RS.

The Oxfordshire-based 911 specialists have developed a tuning programme aimed at making the most of the Cayman’s favourable weight distribution, and in the case of their full-house demo car, a trackday weapon to make GT3 drivers develop a nervous twitch from constantly looking in their rear-view mirror.

Although Autofarm’s upgrades are available for the standard 3.4 ‘S’ engine, this car has the company’s big-bore conversion that takes the capacity out to 3.7 litres. Schrick cams, new induction, freer-flowing cats and an easier-breathing exhaust raise power from 315 to 367bhp, with torque swelling from 273 to 295lb ft – the latter virtually identical to a 997 GT3. In true RS fashion, reducing weight completes the pincer assault, so the front bonnet and rear hatch are carbonfibre, the latter including a polycarbonate rear screen.

In addition, there are lightweight wheels (unusually of Japanese origin), new H&R springs and anti-roll bars, bigger brakes and the all-important Quaife limited-slip differential. Extensive detail modifications – many aimed at track use – complete a lengthy build-sheet.

This is a Cayman that musters nearly 300bhp per ton, and although it’s perfectly well behaved on a light throttle, the deeper and louder exhaust note soon hints at the potential within. Accelerate hard from low revs in a high gear and the flat-six’s booming note reverberates around the cabin, the car surging forward in a manner alien to the standard Cayman S where, inevitably, you’d need to change down one, if not two gears to complete a brisk overtake. The acceleration keeps on building as the motor really begins to howl, revealing a steely midrange and an energetic top end that dumps a pure Porsche fix straight into your veins. With some crisp ECU remapping, a sports clutch and a short-shift kit for the gear linkage, you can really make the most of the engine’s new-found boisterousness, revelling in its response and lugging ability between shortly spaced corners.

Sadly for us today, sub-zero temperatures aren’t a great mix with the stiffer chassis and the cold and fidgety Michelin Pilot Cup Sports. There’s reasonable grip, but the ride quality has predictably deteriorated, especially around town. In these conditions a sudden spike of second-gear torque easily unsticks the rear wheels from the road surface – even in a straight line – but the Cayman remains controllable and beautifully balanced, like the standard car. Only track time will show whether the suspension modifications have been a complete success.

Would you buy one of these instead of a second-hand 997 GT3? Because at £36,000 for the modifications you’re looking at here, the two are uncomfortably close once you’ve factored in the price of a used Cayman S. Of course, you can purchase the modifications in stages – the 3.7 engine build, for example, is around £16,000 all-in. That’s significantly less than dropping in a 3.8 997 ‘S’ engine, but you’ll need to be a determined Caymanista to begin a project build. But with the potential inherent in the car, it’s easy to see why you might be.