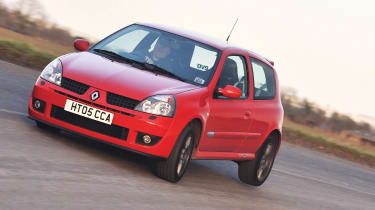 evo boss Harry Metcalfe owns a number of cars. Ferrari, Lamborghini, Maserati and Range Rover are just some of the names on the keyrings hung on his wall. So where does an eight-year-old Clio belong in all of this?

The Renault Clio 182 Trophy is a true giant killer, a car which finished in the top three of our 2005 Car of the Year contest, beating Aston Martin, Porsche, Lamborghini and two BMW M Division cars to the podium. It conquered Harry's heart, too, and the very car that featured on that test now resides in his collection.

In the video below, Harry talks us through the hardcore hot hatch and why he loves it so much...