Harry Metcalfe remains impressed with the Renault Clio 197, despite an untimely coming together with a caravan 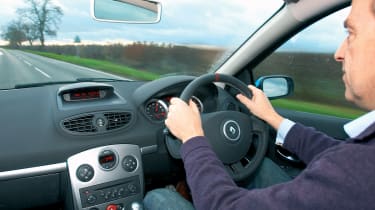 Had another blast in my Clio Trophy recently. It’s such a contrast to the 197, mainly because the Trophy feels effortlessly grunty where the newer car feels hollow, but as I pile more miles on the 197 I’ve come to realise that, while it’s a completely different animal, it’s just as loveable all the same.

It’s so much more usable for a start. I regularly have four-up family outings in the Clio 197 (my wife would rather queue for a bus than suffer a journey in the Trophy). Then there’s the excellent cabin, the great seats, brilliant dynamics and an engine that at least still has enough fizz to make life interesting. Mix this little lot together and you’ve got one of today’s great hot hatches.

But you know what my favourite thing about the 197 is? It’s the looks. Unlike some of its rivals it doesn’t look as if it’s trying too hard to appear butch. I’d feel a bit silly running round in the over-accessorised Corsa VXR for example, sillier still in the revtastic Civic Type-R, and no matter how many times I hear how good the new Mini Cooper S is, it just doesn’t hit the target for me, pandering to the fashion market too much.

So that’s why I’m gutted about what happened last week. It was the journey from hell. Gatwick to central London. In rush hour. I was late, and to make matters worse I got stuck behind two enormous caravans being towed by two scruffy ex-Post Office Sherpa vans. Understandably, those of us stuck behind this mobile blockade were getting increasingly frustrated.

Finally, the first van and caravan combo looked like it was about to turn off. I went to dive past, but then the driver of the second van realised he’d overcooked the turning and stopped too suddenly for me to do the same. Next thing I knew the Clio’s nose was getting personal with the blunt end of the caravan.

There was little point in swapping details, as insurance turned out to be a foreign concept to the driver (the caravan didn’t even have a number plate), but as there was no obvious damage it looked like the Clio’s energy absorbing nose had done its job, so I wasn’t too worried.

It wasn’t until a few days later that I noticed the bonnet wasn’t sitting quite right. On closer inspection it seems the impact pushed it towards the windscreen ever so slightly. I never did like caravans. I like them even less now.