Stylish new hatchback has been revealed ahead of Frankfurt; GT model hints at a future Renaultsport 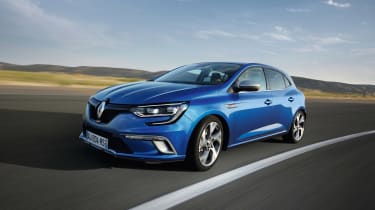 Renault has released a full gallery of images and more details of the latest Megane hatchback – twenty years after the first model carrying the Megane name made its debut.

The latest car sits on Renault’s ‘Common Module Family’ or CMF vehicle architecture, which has allowed Renault to develop the Megane far beyond the capabilities of the existing model, both mechanically and technologically.

In terms of size and proportions, the Megane is quite different from the model it replaces. The front end is 25mm lower than before and the track a full 47mm wider, while the rear track has grown by 39mm. The wheelbase is 28mm longer and the overhangs shorter – all resulting in a sportier stance than the slightly bulbous third-generation Megane.

Seen on selected Renault models over the past decade, the new Megane GT will also include four-wheel steering, part of a system Renault calls 4Control. Developed and calibrated by engineers at Renaultsport, the system offers greater stability at higher velocities and improved manoeuvrability at parking speeds. 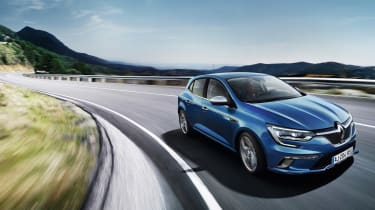 A range of turbocharged petrol and diesel units is central to the new Megane range.

While the lower-powered options are unlikely to whet the appetite of evo readers, they’ll certainly be frugal – Renault describes its 85.6mpg, Energy dCi 110 model as the core of the range. Even more parsimonious is the ‘hybrid assist’ diesel set to appear in 2017, with a targeted combined economy figure of 94.1mpg.

More interesting is the dCi 165 engine arriving in 2016, which will slot under the bonnet of the GT. Also available in the range-topping GT is a 202bhp version of Renault’s TCe petrol, which should serve as an adequate stop-gap before the inevitable Renaultsport.

Three transmissions are available – the latest iteration of Renault’s six-speed EDC dual-clutch gearbox, a seven-speed EDC (standard with the GT’s TCe 205) and a six-speed manual. In common with the Clio Renaultsport, the GT’s seven-speed dual-clutch supports a multi change-down function, where holding the paddle while braking hard automatically changes to the lowest suitable gear. 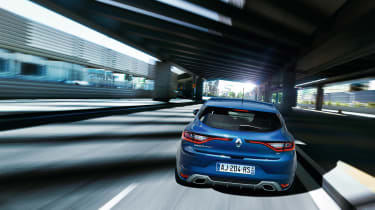 In its latest iteration, the Megane adopts styling cues developed through recent models like the Clio, and particularly the not-for-UK Espace and Talisman revealed over the last few years.

Those touches imbue the Megane with greater style and class than its predecessors, echoing a path taken by other mainstream rivals wishing to capitalise on the market’s trend towards premium products.

From the side, the new Megane has hints of Clio about its proportions, but the front and rear ends are very much cut from the Talisman cloth. Distinctive C-shaped daytime running lights encircle slim headlamp units and cut deep into the front bumper, while the rear light signature – also formed from LED units – stretches almost across the car, broken only in the centre by a prominent Renault emblem. For the first time on a Megane, Renault will offer full LED headlights on high-end models.

The car’s sporty stance is enhanced in the GT version pictured, which will arrive at the model’s debut. Like the Clio GT, the Megane GT carries Renaultsport badging, but stops short of being a Renaultsport-developed product.

Instead, it uses 18-inch Renaultsport-developed alloy wheels, with two chromed tailpipes, extra air scoops, a broader air intake at the front and a honeycomb grille, to give just a hint of extra performance. Iron Blue paintwork (pictured) will be on the options list, with ‘Dark Metal’ details. 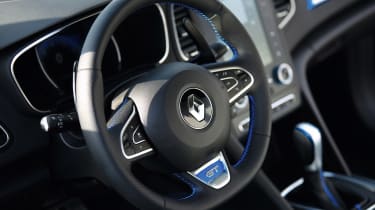 Renault has focused on quality with the latest Megane interior. While the last model made significant steps over the car it replaced, the latest Megane goes even further with widespread use of soft-touch materials, full-grain nappa leather on the steering wheel, and liberal splashings of gloss black and chrome detailing. High-end versions also get Alcantara trim, heated seats, electric lumbar adjustment and even a massage function.

A notable addition to the Megane’s cabin is an optional portrait-orientated 8.7-inch R-Link 2 touchscreen, echoing a style that’s becoming more popular across the automotive industry. Like other recent units, the display will respond to smartphone-style pinch and zoom inputs. Some of its functions will also control the car’s Bose audio system.

A full colour head-up display is now standard, while the instruments are now largely digital, both speed and engine revs displayed by a 7-inch TFT screen ahead of the driver.

The new Renault Megane goes on sale in Europe in early 2016 and in the UK from Summer 2016. The sporty GT will make its debut at the same time. Pricing is yet to be confirmed.

You can read about more launches from Frankfurt in our guide, or catch up with the full stories on our Frankfurt show hub page.