300bhp hot hatchback will be revealed in full later this year at the Frankfurt Motor Show, but could be teased at Monaco GP 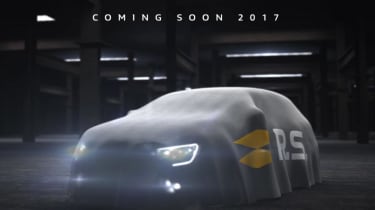 In celebration of achieving one million likes on Facebook, Renault has teased the latest addition to the Renaultsport family - the new Megane RS. Latest rumours suggest that the hot hatchback could be in for a teaser at the 2017 Monaco Grand Prix on Friday, May 26th. The official schedule for the event shows a timeslot for 'Revelation Renault Sport', starting just before 1pm local time - confirming a reveal of an RS-badged model. It's uncertain whether this will be the Megane RS or not, but it looks likely.

The hot hatchback will go toe-to-toe with the Ford Focus ST and Volkswagen Golf GTI, but an anticipated power output of around 300bhp means it should be able to rival the powerful Honda Civic Type R and SEAT Leon Cupra 300.

The teaser video doesn't show much, simply exhibiting the car's lighting signature glowing through a cover. The standard Megane's integrated daytime running lights make an appearance, but there also appear to be a trio of extra chequer-patterned LEDs in the foglight position - aping those seen on the Renaultsport Clio R.S 1.6.

Elsewhere there's not much to see, with the car's cover totally hiding any extra bodykit, large wheels or racy additions to the Megane. The teaser image does bear the legend 'Coming soon 2017' though, which confirms that the car will make its debut later this year - and Renault has confirmed a full debut at the Frankfurt Motor Show in September.

The outgoing Renaultsport Megane offered 271bhp from its 2.0-litre engine. We're expecting a power boost to shoot this up to over 300bhp. We'd also expect this to come from another 2.0-litre, inline-four turbocharged engine - though a report from French publication Auto Moto suggests the new Renaultsport Megane could use the turbocharged 1.8-litre unit from the recently revealed Alpine A110. In that car it produces 249bhp and 236lb ft of torque, and is linked exclusively to a seven-speed dual-clutch transmission.

The new Renaultsport Megane will only be available with five doors, and the latest Megane's platform means it will be wider and lower than the outgoing model. Clever tech like four-wheel steering (already seen on the current flagship Megane GT) could improve agility, but would add weight.