Fluid and talkative, the 720S handles as well as it goes 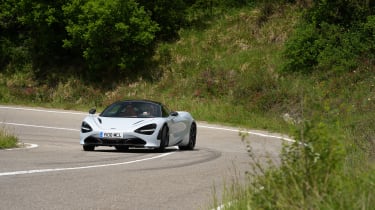 A wise person once said ‘what is good for ride is good for handling’, and it’s a saying McLaren has taken to heart, the 720S dealing with iffy surfaces better than some hot hatchbacks. The result isn’t just a car that’s surprisingly comfortable, but also one that makes light work of roads that would feel a lot busier, and require a lot more driver input, in some of its rivals.

It’s a factor of that hydraulically interlinked suspension set-up, which takes the place of conventional mechanical anti-roll bars. While anti-roll bars do what they say on the tin, controlling roll around a car’s axis, linking each side of the car can be detrimental to ride comfort, with bumps at one wheel having an effect at the other. Like an old Citroën – albeit a lot more sophisticated and controlled by some mind-bending algorithms – McLaren’s set-up allows for both compliancy and control.

It has limits, even given the stiff carbon structure – it’s not immune from potholes, and really sudden intrusions can still thump through the chassis. But for the most part, the 720S rides with an impressive fluency. 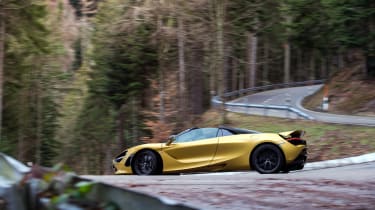 As you’d expect, it’s also a capable handler. Key to its appeal is the steering, which is about as good as it gets short of McLaren’s own hardcore, slack-free ‘Longtail’ models. The wheel feels quite light at first, but perhaps a better way of putting this is that it isn’t artificially heavy – there’s simply not much weight sitting over the front axle, and on the move there’s a constant stream of feedback tugging lightly through the rack. Precision and response are both perfectly judged too.

Few supercars inspire so much confidence over the first few miles, at least in the chassis department – with the full performance of that engine never far away, you’ll tread more carefully on the right-hand pedal than you’ll lean on the front end.

The 720S will carry huge speed along a road, and feels spectacular when you’re in the groove. It’s also got a more intimidating side though, harder to read when the chassis starts moving around – something you’re admittedly more likely to discover on a track than on the road.