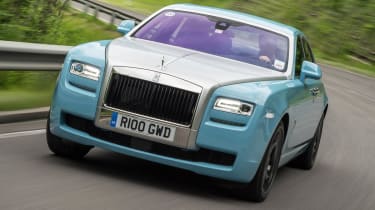 The Rolls-Royce Ghost gets an update for the 2014 model year. Prices start at £200,500, while this limited edition Ghost Alpine Trial Centenary Collection is estimated to cost £220,000.

The Ghost’s key change for 2014 is the addition of new ‘Satellite Aided Transmission’ (or SAT for short). Trialled by BMWs and due on the new Wraith coupe, SAT tells the automatic transmission the Ghost’s location via the navigation system, and then determines which gear is suitable given your driving style, gradient of road and whether there’s a bend or junction approaching.

The Ghost’s performance is on a different level to the Phantom, its twin-turbo 6.6-litre V12 engine pumping out 563bhp and, more importantly, 575lb ft of torque. The result is a 0-60 time of 4.7sec, despite a rather portly 2365kg kerb weight. On the 2014 version, power stays the same but there are some subtle tweaks to the suspension and to the infotainment system, where there’s now a mouse pad for inputting info into the system (the Chinese prefer a mouse pad to the regular BMW ‘wheel’ apparently).

The Stelvio Pass proves a strange place to test a Rolls-Royce Ghost, especially as it helps emphasise its gargantuan size and dreadful steering feel (especially once half a turn of lock has been applied) but proved ideal for testing out the gearbox tech. SAT is always live from the moment you move off but to be sure I could spot the difference it makes, I drove a ‘regular’ Ghost along the route before trying the Alpine Ghost.

It was a good job I did because otherwise it would be very hard to spot SAT was doing anything at all; so seamless is it in operation. It’s most noticeable when going downhill because, as you ease off for an approaching bend, you notice the gearbox isn’t shuffling up the gearbox to reduce the revs but keeps the same gear engaged, or even changes down if the bend is particularly tight. It’s clever stuff but is so discreet in its operation, you struggle to notice it’s doing anything.

But then that’s Rolls-Royce all over because delivering absolute decorum at all times is the company’s goal. In fact, no matter how hard I drove the Ghost, it simply refused to misbehave. I came away more convinced than ever the Ghost is not a car for hooning in but simply for relaxing in. That’s not a criticism either; in a time when many premium car makers fuss over lap times and ‘sportiness’, it’s something Rolls-Royce should be congratulated on. How does it compare?

The Ghost’s most natural rival is the Bentley Flying Spur, which has 600bhp in £150,900 Speed form, while if it’s a sharp sports saloon you crave, our current pick of the limos is the £93,175, 434bhp Porsche Panamera GTS. An all-new Mercedes S-class is on the horizon, with higher levels of luxury than ever promised.

The Alpine Trial Centenary Collection driven here is limited to 35 units; all will be finished in sky blue with a black grille and wheels, replicating the colour scheme of the famous ‘Radley’ Silver Ghost, which took part so successfully in the 1913 Alpine Reliability Trial. Inside, there are special inlays showing the topography and distances of this two-week long event but other than that, this car is identical to all other 2014 Ghosts. Despite that, a £20,000 premium is expected, with an estimated £220,000 price tag for this special edition.