A great all-rounder with a clever engine, the second-generation Skoda Fabia vRS starts at just £5000. But beware of the pitfalls. 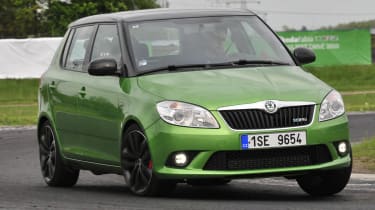 The Clio’s bigger, naturally-aspirated 2-litre engine produces 194bhp and 159lb ft of torque. £4k-£8k presents a big pool of cars to choose from, including the harder-edged Cup models.

Built between 2010 and 2014 the junior GTI housed the same engine as the Fabia vRS, so performance is all but the same. The premium badge means prices start at £8k.

The turbocharged R56 Cooper S (2006-2014) has similar power and torque to the Fabia. While it is considered more stylish by many, like the Skoda, it suffers with engine issues. Prices start from as low as £3k for high milers.

Early examples with average-to-high miles and a full service history can now be found for £5000 from private sellers – similar cars offered by trade vendors carry about a £500 premium. The top end of the market takes you past £8k, permitting access to later cars with the revised engines, with fewer miles on the clock. Estates are few and far between so command a slightly higher price than equivalent, hatch-bodied models. Cars with the optional (£450) black roof and black wheels are more popular, as are those equipped with heated seats.

‘The TSI engine has been around for a while now, powering a variety of VWs and SEATs, but it’s a clever piece of kit . The supercharger gets you up and running, giving the small engine plenty of low-down punch. At 2400rpm the turbo comes online and overlaps on the workload until 3500rpm, where it takes over entirely. It’s all very clever and it still achieves a combined 45.6mpg.

‘The engine is remarkably smooth right across the range, and it’s virtually impossible to tell when the charger swap-over takes place – the DSG ’box keeps everything nicely on the boil, too. The car rides well, despite a firm setup, and it has plenty of grip. However, it lacks the chuckability of the very best in its class and the steering doesn’t offer quite the level of detailed interaction that you hope for.

‘If you are coming from a Renault Sport background you will probably be a little disappointed, but if your starting point was a Citroën DS3 then you’d be quite pleased by the dynamics as the vRS falls neatly between the French pair.’ 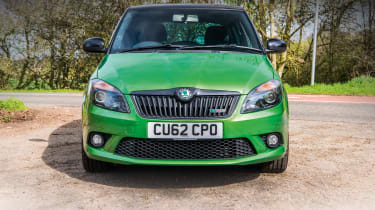 ‘I bought my vRS new in June 2011. I’d had a Mk1 Fabia vRS for five years before, so I was already a Skoda fan, but as soon as I took the Mk2 on the test drive I was completely sold. It just went so well.

‘I still love the car, though I have had some of the usual issues. It was fine up until about 28,000 miles, then I started to get misfires. The tip of the spark plug on cylinder three had eroded. So all the plugs were replaced, and initially everything was fine. But when it got to about 34,000 miles it started to use a lot more oil. It always used a bit – about 250ml every 4000 miles – but it went up to about 750ml every thousand miles. And it started misfiring again. 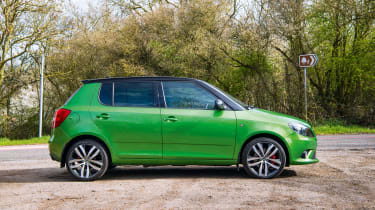 ‘Fortunately, after the first three years of ownership, I’d bought an extended warranty for another two years. The dealer – Bickerton in Sheffield – tried a few things, including a modification to the breather pipe, but no change. At just over 40,000 miles, they agreed to fit a new engine.

‘I’ve done 50,000 miles now and the car seems to be fine. It doesn’t even use any oil! As far as I’m concerned, Skoda has got on top of the problems. And I have to say I’ve always had really good service from Bickerton. Servicing itself is reasonable – I’ve paid £139 for a minor service, £249 for the bigger one with plugs, filters, etc – and I get about 32mpg around town and up to 43mpg on a run, always on Tesco Momentum.

‘I did have an issue with one of the clutch packs at about 25,000 miles – a juddering in first and second gears – and it was changed under warranty. I also had the gearbox recall to have the oil changed from synthetic to mineral. No problems at all since; in fact , the DSG is absolutely brilliant . Despite the problems, I’m still a massive fan of the car.’