The choice of engines in the Karoq isn’t vast; there are two diesel and two petrol motors to choose from. However, despite this quartet you only need remember two peak power outputs, since the smallest capacity petrol and diesel engines put out the same bhp while the larger units match on output too.

Lets start with the smallest engine and work our way up. The 3-cylinder 1-litre petrol engine produces 113bhp from 5000rpm and an impressive, given its small capacity, 147lb ft of torque at 2000rpm. It’s matched on power by the bigger 1.6-litre 4-cylinder diesel motor, but as you might expect the oil-burner has even more torque with 184lb ft. 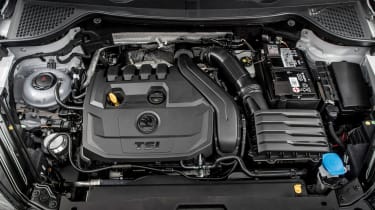 The other two engines, the 1.5-litre petrol and 2-litre diesel, each have four cylinders and both put out a maximum of 148bhp - the petrol at 5000rpm, and the diesel at 3500rpm. The diesel is more torquey with 251lb ft from 1750rpm, compared to the petrol’s 184lb ft at a slightly slower engine speed.

All engines are available with either a six-speed manual gearbox or a seven-speed DSG transmission. All come with just front-wheel drive as standard, and the 2-litre diesel is the only version that can be had with four-wheel drive – it’s a Haldex system that predominantly drives the front wheels but is able to engage the rear axle whenever necessary.

The DSG transmission’s breath of abilities is, as usual, impressively vast; it’s just as happy to smoothly and automatically shift between gears at low speeds as it is to swap ratios instantly when you pull the steering-wheel mounted paddles. But, if you opt for the dual-clutch transmission you won’t be able to relish the experience of operating the Karoq’s manual gearbox.