Right from the very start, and after just a few metres down the road, the Karoq appears to be a very satisfying car to meander about in; all of its controls are so tight, so precise and are so completely slack free. All of the pedals are solid and the movement so smooth that just releasing the clutch feels like a rewarding action and the steering – although very light – is amazingly direct. The steering can be made heavier by engaging the Sport driving mode – that’s pretty much all the button does though, as the engine’s character remains the same, there’s no extra noise and, as the dampers are passive, the chassis doesn’t change. The extra weight doesn’t feel appropriate; the more delicate setting suits the other controls in the car.

The absolute highlight, however, is the gear change. The gate is close and you don’t need to move your hand sideways by much before you can slot it forward into first. The forward throw into a gear is a little longer compared to the lateral movement, but the path the lever takes is shorter than you’d ever expect in an SUV, and shorter than most performance cars. The quick shift is made even more gratifying by a smooth and beautifully defined action – you won’t miss or engage the wrong gear here, no matter how much you rush your changes.

A similar sense of accuracy can be felt in the chassis. It reacts promptly to your inputs, turning eagerly when you point the nose at a corner and there’s surprisingly little roll. The ride is pleasingly supple and controlled, too. 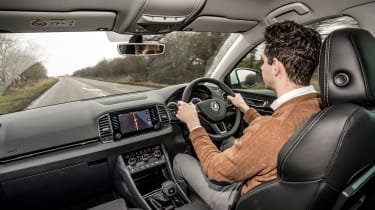 But as you push the Karoq, you aren’t rewarded with any more excitement. Only the steering dictates the angle of the car, you can’t lift off the throttle early in a corner to change its attitude, pointing the front towards the apex. Even some aggressive trail braking doesn’t have much of an effect and the Karoq begins to feel a bit inert. The front-end does resists understeer well, it has to be said, but it is the first to relinquish grip when really pushed.

The four-wheel drive diesel can be coaxed into the tiniest amount of power-on oversteer out of tight, first or second gear corners – only if the electronic stability system is in sport. The ESC cannot be fully switched off, sadly. 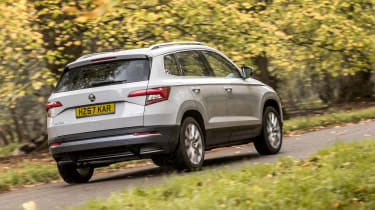 The Karoq’s controls really are its highlight. That’s not to say the rest of the car is disappointing, it’s just not as memorable, as involving or as charismatic as what we’ve become used to from Skoda’s small SUVs. However, there are still some pleasingly useful Skoda style elements that make living with the Karoq just that little bit easier: not only is the cruise control not deactivated by changing gear, even in the manual version, it still works with the ESC as off as it will go.

‘This focus on comfort doesn’t come at the expense of agility, and the Karoq can be hustled effectively through a series of corners. The electrically assisted steering is direct and naturally weighted, while there’s decent grip at the front end. The combination of high ride height, modest rubber and, in the diesel models, hefty engines means the nose will wash wide when pushed, but you do have to provoke this behaviour with aggressive inputs.’ James Disdale, Road Test Editor