The Karoq doesn’t exist to smash acceleration records, set your hair on fire or sit in the outside lane of an Autobahn flashing its lights to encourage RS6s to get out of its way. As a result the double-figures 10.9sec 0-62mph time of the 1.6 diesel version, the slowest accelerating Karoq of the range, is no surprise, but nor should it really come as a disappointment.

Next up is the 1.0 TSI three-cylinder with 113bhp, which manages a top speed of 116mph and nips to 62mph a little quicker in 10.6sec, and does so with a bit more verve, an eagerness to rev, and a more interesting tone to its acceleration than the refined but unremarkable diesel. It feels quicker than the on-paper figures suggest. 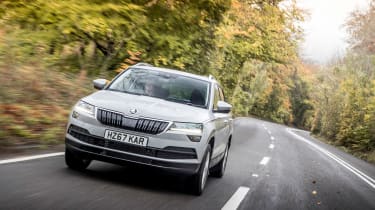 The 1.5-litre turbocharged model, with 148bhp and just front-wheel drive, chases to 62mph in a more than adequate 8.4sec. It also has the highest top speed of the range with a vmax of - prepare yourself - 127mph. It's no sweet revver though. In fact, it always feels a little more strained than the 1.4 TSI it has replaced across the VW Group's portfolio, and gives up the redline race with about 1000rpm left on the 6000rpm tach - better instead to surf along on the mid-range torque.

That and the 2-litre TDI diesel, which just trails the 1.5 TSI with a 0-62mph time of 8.7sec, feel least troubled by the Karoq's size and should be the best choices over longer distances or trips involving a full complement of luggage and people. The diesel in particular is effective in real-world driving, and there's just enough performance here to begin to test the chassis, but it'll take a full vRS model before any Karoq's powerplant delivers actual excitement.