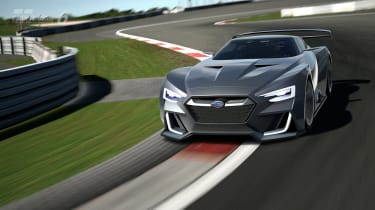 Subaru has revealed its Viziv GT Vision Gran Turismo virtual concept, developed for the Playstation 3 title Gran Turismo 6. The tough looking Subaru joins virtual machines from other manufacturers, such as BMW’s extreme M235i racer and the low-slung metallic sculpture that is the Mercedes-Benz Vision Gran Turismo.

While it'll never exist in reality, in GT6 the 1,380kg Viziv GT is powered by a highly tuned version of Subaru’s classic 2-litre boxer engine, but uses a hybrid configuration to boost power. Three high-output electric motors are utilised, one at the front and two at the rear, helping to deliver a healthy 591bhp and 593lb ft of torque. The Subaru Vision GT concept is able to independently control the output of each motor, which helps to vastly improve its turning ability.

Using the design language previewed at this year’s Geneva Motor Show on the Subaru Viziv 2 Concept, the striking and angular body utilises carbon panels to help reduce weight. It is a solid shooting-brake design and boasts a rear wing that would put any ‘regular’ WRX STi to shame.  Blistered arches and deep diffusers are present at both ends giving the Viziv GT a very aggressive stance, giving virtual racers something to watch out for in their rear-view mirror.

The Viziv GT has also been used to demonstrate Subaru’s technical and engineering expertise, with its use of torque vectoring clearly illustrated with flashing lights on the wheel arches. Whilst these add a sense of visual drama, they also serve as a constant reminder that Subaru’s tech is at work keeping you out of those virtual barriers…

The project was developed for the Vision Gran Turismo series, where brands and manufacturers design concepts that can be driven on virtual race tracks all over the world. Unfortunately, this is only a concept but like the concepts from BMW and Merc, will soon be available for download in Gran Turismo 6.