Both conceal turbocharged power and 4wd, but which is the better drive, Mazda 6 MPS or Subaru Impreza WRX STI Spec D? 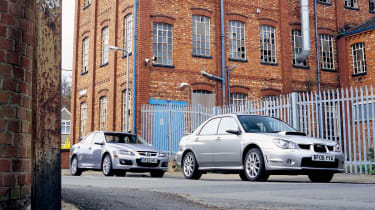 Tarmac wet from a long night of rain, morning skies promisingly bright and clear, and twenty miles of my favourite local B-road stretching out between me and a breakfast rendezvous with photographer Kenny P. It’s the perfect prelude for a memorable cross-country charge in the Subaru Impreza WRX STI Spec D.

With ‘D’ standing for discreet, this is a new take on the STI theme, but a welcome return to familiar territory for fans of the original stealthy-fast Impreza. Sporting clipped wings and muted colours, this STI is no less ballistic than its extrovert brethren, but driving it as Subaru Tecnica International’s engineers intended now no longer feels like a two-fingered salute to other road users. Better still, that toned-down exterior really does reduce your expectations, softening you up for the perfect sucker punch as you discover its 2.5-litre flat-four heart still beats with classic STI fire and brimstone.

Despite the steely hue and minimal aerodynamic appendages, the Spec D still has presence, the bonnet scoop, frowning nose and subtly flared arches holding great promise. But then after so many years of WRC exposure, the Impreza’s outline, no matter how discreetly adorned, always suggests performance.

This much is proved as I arrive at our breakfast meeting point and park next to the Mazda 6 MPS. Not so much stealthy as completely off the performance radar, this bulky, frumpy four-door is about as uninspiring as it gets. A quick visual scan reveals little to generate even a flicker of excitement, save the fat oval tailpipes, a closer inspection of which exposes them as nothing more than false finishers, poorly concealing a pair of frankly embarrassing pea-shooters.

Fake pipes apart, if you’re a Q-car purist, you’ll regard the MPS as a masterpiece of deception, for beneath its Clark Kent exterior sits a turbocharged 256bhp, 280lb ft engine, a six-speed gearbox and an all-wheel-drive chassis. On second thoughts, forget the Superman analogy; this car is so unassuming that it resolutely wears its pants on the inside of its trousers at all times. With a vest. Tucked in, of course.

Frumpy it may be, but there’s no denying its specs appeal. Mazda’s first direct-injection petrol engine, the blown 2.3-litre four-cylinder is potent enough to power the MPS to 60mph in less than 6.5sec and on to a serious 149mph. A clever four-wheel-drive system – which works as front-wheel drive until its sophisticated raft of sensors detect help is needed from the rear – can send as much as 50 per cent of drive to the back, as well as switching between Normal, Sport and Stability programs without you knowing – or feeling, for that matter.

Further proof that Mazda is serious about its MPS brand can be found in the fact that the bodyshell has over 50 per cent more torsional rigidity than the standard 6, which in turn has enabled Mazda’s engineers to fit thicker anti-roll bars and suspension that’s stiffer by some 25 per cent at the front and 26 per cent at the rear.

Compare this with the Impreza Spec D’s stats and it’s clear that the covert STI isn’t going to have things all its own way. Boasting a slight capacity advantage, its turbocharged 2.5-litre flat-four develops more power and torque (276bhp and 289lb ft), but needs more revs to hit the peaks. It counters with less weight, tipping the scales at 1495kg (compared with 1665kg for the more portly Mazda), which helps it record an impressive 0-60mph time of 5.3sec, and a top speed of 158mph.

That might look like a sizeable advantage in black-and-white, but on the road, where you’re concerned with shades of grey, it’s unlikely to prove as clear-cut. Factor-in the MPS’s £4500 price advantage and the battle couldn’t be more closely fought. Time to let them slug it out.

The Spec D may look like a more humble Impreza, but the driving experience is pure STI. Fist-tight ride, rifle-bolt gearshift, weighty steering and spiky power delivery make it a full-on, no-nonsense machine from the moment you set off.

As ever with an Impreza, all good intentions of driving at a steady, modest pace go straight out of the window as soon as a derestriction sign hoves into view, your soul corrupted by the STI’s appetite for speed.

Unleashed, the Spec D is quick. Truly, stupidly quick, possessing all the point-to-point pace you could ever want and more than you can sensibly deploy for more than a few minutes without fearing for your licence.

It’s demanding though, both physically and mentally, for the at-times-punishing ride filters few of the road’s bumps, while the power delivery, special Bridgestone rubber and direct steering often conspire to send spasms of torque-steer through your forearms out of tight corners and over awkward cambers. Rapid it may be, but you have to be prepared to roll up your sleeves and get stuck in.

The STI has an adjustable centre differential, called Driver’s Control Centre Differential (DCCD). You can set it manually, but to be honest you don’t really need to switch it out of automatic mode, for the handling and balance is adjustable enough using conventional means. A lift on turn-in shifts the weight nicely forward, and if you get back on the power early enough you can feel the power shifting to the rear, neutralising the modest understeer and even generating some power oversteer when you hit the sweet spot. It’s all easily exploitable in the dry, but if the surface is damp or wet you need to be prepared for rapid corrective steering inputs to catch the tail. Tricky to master, it’s nonetheless one of the most exciting and thrilling all-wheel-drive chassis around.

The brakes are similarly businesslike, the big Brembo set-up providing a rock-hard pedal and plenty of lasting, brick-wall stopping power. You just need to have confidence during the initial phase, for the pedal effort required is reminiscent of an old-school unservoed system.

Censored on the outside, there’s no doubt the Spec D remains a hardcore machine at heart. In contrast, the MPS’s mild manners are shot through the entire car. The steering and other major controls are lighter, more filtered, the gearshift less mechanical, the ride more rounded and compliant. It feels, unsurprisingly, like a workaday saloon.

Don’t be fooled, for while the Mazda is a more relaxed, less demanding car to drive, it still has plenty of pace. In fact, unless the STI’s driver is prepared to throw caution to the wind, the MPS has most of its moves covered. With a more compliant chassis and a less fierce power delivery, the MPS makes subtle but relentless progress, flowing smoothly on roads that have you gritting your teeth and tightening your grip on the wheel in the Spec D. True, there’s less sense of connection, but at times this works in the Mazda’s favour.

Through fast and slow corners it behaves more conventionally than the Impreza, pushing into understeer through tight bends, floating slightly through fast sweepers. Like the Subaru, you can adjust its attitude by playing with the throttle, but it always feels, and behaves, like a front-driver rather than a four-wheel-drive car, albeit a front-driver with excellent traction from apex to exit.

Much like the chassis and power delivery, the brakes have a softer feel and less outright bite, but once you get used to the more mainstream feel you find they are still up to the MPS’s considerable demands. It all adds up to an impressively effective car, but one that isn’t as engaging, exciting or absorbing to drive hard..

Before we started, this comparison didn’t feel strictly fair. After all, the Impreza is a more focused, more expensive and more powerful hardline saloon; a purebred rally-rep rather than a hotted-up repmobile. And much of what we’ve found bears out that initial gut feeling, for the Mazda isn’t as quick all-out, or as exciting to master, and it looks like Valium on wheels inside and out. And yet, the more you drive it, the more you come to realise that it is more than capable of embarrassing many a ‘sporting’ car..

At just under £24K it represents strong value for the performance on offer, but it’s bereft of the emotional content you’d surely crave from the kind of hardware it contains. Maybe you’d be tempted if you could sneak it through on your company car scheme, but it’s hard to imagine actually stumping-up your own hard-earned cash to buy one.

So the Impreza wins, largely by dint of its more visceral performance, but also because it has retained a modicum of visual presence. It’s not without its problems though, the main one being a £28,540 asking price. That’s pricey, especially when it puts what remains a rather tinny Japanese saloon into BMW 330i territory. But unfortunately for Mazda, even if the Spec D’s asking price is too rich for your blood, there’s its equally subtle brother, the humble WRX, to consider. A whole £3K cheaper than the MPS, the WRX couples the Mazda’s pliancy with more character and very similar performance. What’s more, spend some of that saving on the PPP performance upgrade and the WRX steals the performance advantage too.

Clearly, when it comes to this covert breed of mystery machine, Subaru has all the answers.