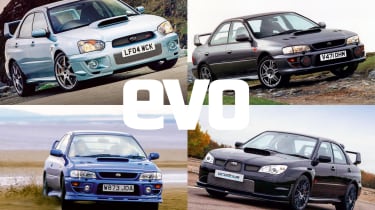 As one of Subaru’s biggest markets, the UK received its fair share of ‘special’ Imprezas. The first of these was the Series McRae, introduced in 1995 to celebrate Colin McRae’s victory the year before on the RAC Rally, which made him the first Brit to win the event since 1976. Based on the original 208bhp Impreza Turbo, the Series McRae was fettled by Prodrive to give better mid-range torque. All 200 examples were in Mica Blue with gold 16-inch Speedline alloys and had Recaro front seats with unique cloth upholstery. Uprated springs, dampers and anti-roll bars featured, too.

Subaru claimed its second WRC manufacturer title at the Rally of Spain in 1996 and so in 1997 launched the celebratory Catalunya. Again, 200 were made, this time based on the facelifted first-generation Impreza with 215bhp. All were in Black Mica with standard running gear and suspension, gold 15-inch alloys, Recaro front seats, bespoke Catalunya trimmings and a quickshift gearchange.

The Terzo (Italian for third) was a limited run of 333 cars in 1998, marking 1997’s championship success. Mechanically it was again standard, but it gained Terzo Mica Blue paint, 16-inch gold alloys, air conditioning and black upholstery with Alcantara highlights. 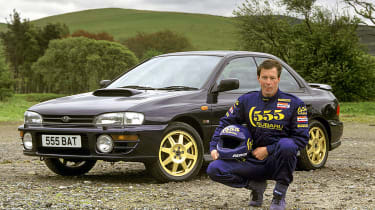 The next special edition, the 22B STI, was based on the two-door, JDM-only STI Type R model, but with the wide body of the WRC cars and a large rear wing. Officially there were just 16 cars for the UK, but many JDM examples were personally imported. It delivered 276bhp and 268lb ft from its 2.2 litres (up from the standard car’s 2.0) and had Eibach springs, inverted Bilstein dampers and a carbonfibre front strut brace. All were in Sonic Blue Mica and had 18-inch gold BBS rims; UK cars had longer gearing.

The 1999 RB5 was named to celebrate Richard Burns (and his race number). All 444 examples had Blue Steel metallic paint, 17-inch Speedline alloys and an STI-type rear spoiler. The boxer engine could be upped to 237bhp with an optional Prodrive Performance Pack. A Prodrive suspension kit was offered, too.

The swansong for the first generation of Imprezas in the UK was the P1, of which 1000 were produced. Developed by Prodrive and based on the JDM STI Type R two-door shell, it had bespoke body styling designed by Peter Stevens, Sonic Blue Mica paint and 17-inch OZ alloys. Power was via an STI-spec 276bhp version of the 1994cc unit and the suspension was uprated to match.

The second-generation Impreza may be slightly less iconic than the first but it still spawned a plethora of special editions, the first of which was the UK300 of 2001. It featured the standard 215bhp 2-litre engine, although there was the option of a 245bhp Performance Pack. All had WR Blue Mica paint, 18-inch OZ wheels and blue Alcantara upholstery.

In 2004 came the WR1, to celebrate Petter Solberg’s WRC title the year before. Based on the facelifted ‘Blobeye’ WRX STI and further modified by Prodrive, it offered 316bhp and 310lb ft, and a 4.3sec 0-60mph time. Available in the UK only, all 500 were Ice Blue and had a Driver Controlled Centre Differential (for the first time in the UK), a special exhaust, Prodrive springs and 18-inch wheels.

The 300-strong WRX 300 debuted in 2005 with 261bhp thanks to a Prodrive Performance Pack. World Rally Blue paint and gold 17-inch alloys were standard; sports suspension, uprated brakes and 18-inch wheels were options. In 2006 a less extreme-looking WRX STI arrived in the form of the Spec D. It still had 276bhp but came in Crystal Grey paint and with smaller spoilers. Black leather, climate control and extra sound insulation also featured. 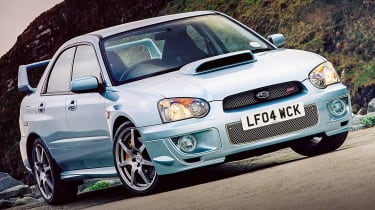 The final UK special edition before the arrival of an entirely new type of Impreza was the GB270, of which 300 saloons and 100 Sports Wagons were produced. Based on the standard WRX and named after its output (again in PS, so 266bhp), it came in World Rally Blue (saloons) or Urban Grey (wagons), sat lower on 18-inch Prodrive alloys and featured Alcantara and leather upholstery.