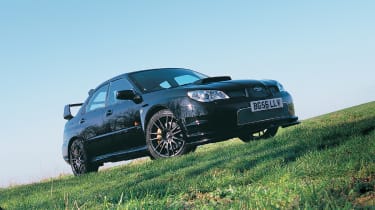 As any of you who have read our '£10K Heroes' story will know, the Impreza RB5 isn’t just one of our favourite Subarus of all time; it’s also one of the most truly memorable cars in the history of this magazine.

That’s quite an act for any car to follow, yet that’s exactly what the RB320 – a car built in memory of 2001 World Rally Champion Richard Burns – has to do. As you’d expect, the job of creating this special Impreza was given to Prodrive and it’s a task it has taken very seriously indeed.

Things get off to a good start with the colour scheme, thanks to the Obsidian black paintwork and anthracite grey alloys (in a new and striking design) which break away from the predictable blue and gold theme. The day-glo orange ‘RB’ logos are suitably distinctive and echo the colour of Burns’s crash helmet design, appearing on the seats as well as the bodywork.

Prodrive has made a good job of putting some fire in the RB’s belly, and while it pulls well from below 3000rpm, it’s once the needle passes 3500rpm that it really comes on strong, surging with the kind of aggressive insistence you’d normally only experience in Imprezas from outside the official Subaru dealer network.

The chassis has also assumed a keener and more focused feel and now sits 30mm lower at the front and 10mm lower at the rear, thanks to Prodrive’s combination of Bilstein dampers and Eibach springs, plus an adjustable Eibach rear anti-roll bar. First impressions are that the RB feels a little edgy, turning in with surprising immediacy. It feels firm too, but as the miles pass you begin to gel with the RB’s responses and exploit its enhanced performance. Uncorked on a great British B-road the 320 absolutely flies.

Satisfyingly, the faster you go the more together the RB320 feels, those expensive springs and dampers bringing far more high-speed composure to the formerly unsettled STi. You won’t relish the nuggety low-speed ride quite so much but, though undoubtedly hard, it still feels more controlled than the standard STi. The Brembo brakes are strong and feelsome, with a smooth response and good resistance to fade, while the Pirelli P Zero Corsas are extremely grippy yet progressive when you breach their limits.

Thanks to the adjustable rear anti-roll bar it’s possible to set up the RB for a fast, neat, nose-led style or you can stiffen the bar to make the tail more mobile and responsive to trail-braking or lifting-off as you turn-in. If you want ultimate all-weather ability stick with the former, but if you fancy a few trackdays the latter makes for a lot of fun.

While it’s unlikely the RB320 will attain quite the adulation its RB5 forebear continues to enjoy, this shouldn’t detract from what is undoubtedly the fastest point-to-point UK Impreza ever to go on sale. Unfortunately, if you want one you’re already too late because all 320 examples have been sold, placing this car alongside the 22B, RB5 and P1 as another rare, collectable and highly desirable addition to the Impreza dynasty.

For more information about the Richard Burns Foundation go to www.richardburnsfoundation.com