It develops 709bhp before you even turn on the nitrous... 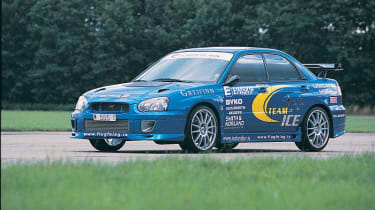 Firstly, ignore the rally-esque livery: this is a road legal, 2-litre STi Impreza, like you'd buy from your local dealer. Actually, that's not entirely true, because what you're looking at here is pure, unrestricted WRC-bred Impreza technology - built by arguably the best in the beef-it-up business, Roger Clark Motorsport (RCMS). This very car recently set a new world record for a manual transmission Impreza, running a ballistic 9.84sec standing quarter mile at 143mph. It boasts one of the most powerful 2-litre engines ever built - developing 709bhp @ 7500rpm, and 620lb ft. And there's an additional 150bhp hit of nitrous oxide, helping the car pump out over 800bhp at full chat. But this car isn't solely about an incredible engine. Exposing its rally roots, RCMS does this tuning package as a bare shell rebuild. In goes a roll cage, Kevlar seats, a trick MoTeC LCD data display, Momo steering wheel, nitrous oxide system and braided brake and fuel lines. The standard suspension is replaced by special-stage-derived Ohlins coil-overs with remote dampers, while custom AP Racing brakes nestle behind OZ Racing lightweight alloys. Then the fun starts under the bonnet. The bottom end gets a forged steel crank, elongated conrods and custom pistons; the heads are ported and polished, and WRC titanium valvegear is installed, along with four meaty cams. The whole fuelling system is changed, with a custom fuel cell feeding twin pumps into a fancy eight-injector set-up. The inlet manifold is straight off an Impreza WRC, with short (lag-free) hard pipes running to an enormous front mount intercooler, with water spray. The car's Garrett GT3040 turbo features cutting- edge ball-bearing technology and is mounted on a bespoke 'twisted' exhaust manifold, with external wastegate and a custom de-catted exhaust system. All this turbo technology is managed via MoTeC electronics, with mapping done in-house. To cope with the gargantuan outputs, the transmission is totally overhauled with a Modena six-speed 'dog' box with straight-cut gears, high-grade clutch, lightweight flywheel, carbonfibre propshaft, plated LSD and electronic diff control. Fire up the RCMS Impreza and you're greeted with a glorious flat-four rumble. Blip the throttle and the revs rise and fall rapidly, smoothly, deafeningly. Drop the (surprisingly light but rattly) clutch and engage first gear with a clunk of the whining dog box and you're ready for the off. Or at least you thought you were... Flooring the throttle results in a bonkers blur of fast-forward action and your body is left to fight crushing g-forces. As your brain adjusts to the onslaught of thrust you find yourself instinctively banging through the ratios in the superbly direct, ultra-aggressive gearbox. And with each new gear you're hit with a monster slug of boost that has all four tyres chirruping. Trying to describe this car's phenomenal pace is pretty pointless; it's one of those 'you'll never believe it until you've tried it' experiences and there's nothing to compare it with. You could put it up against even the very fastest supercars, and it would annihilate them... And yet with the exception of the (essential) compromise of the dog box, it's as happy to be driven slowly as the standard STi. World record-breaking 9.0sec quarters, 200+mph V-max, 0-60 in 2.5sec... and yet still road legal, smooth and driveable. I don't know what's more insane... the mad machine's outrageous ability, its exclusivity, the money/time you'd have to invest to have it, or the fact it's even allowed.