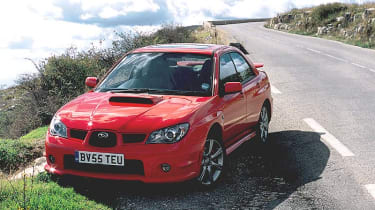 We're high up on the Col de Vence, one of the stages of the Monte Carlo Rally. The first snow of the season fell on the peaks of the Alpes Maritimes two days ago, and on this clear, bright, autumn morning, two Imprezas are engrossed in a game of tag through the stone arches and along the switchbacks, their drivers playing at being Solberg. Strange thing is, the bewinged STi that's leading the way can't shake off the red WRX behind it... If you'd just stepped out of the hardcore, rally-rep STi you'd swear that nothing short of the real thing would stick with it, especially on roads as perfectly suited to it as these. Yet here is its apparently lesser sibling, practically nailed to its exhaust. Like the STi, the WRX now has the 2.5-litre flat-four from the '06 Forester, endowing it with 227bhp at 5600rpm and peak torque of 236lb ft at 3600rpm, 400rpm lower than before. They're increases of just 4bhp and 15lb ft, but with the bigger-capacity engine the torque is now distributed across much more of the rev-range. With the addition of AVCS, Subaru's form of variable valve timing, and a lower final drive ratio, the result is more instant response from a broader section of each gear. So although the 0-60mph time of 5.4sec and top speed of 143mph are pretty much identical to the previous car's, there's less need for cog-swapping in the new WRX. Fuel consumption remains unchanged however, which explains why our little jaunt across the Col saw the gauge plummeting as though it had been dropped off the edge at one of the hairpins. The only other real downer is perhaps a slightly duller note from the new engine. Still definitely boxer, but without some of the burble. Although you'll need to change gear less, the action of the five-speed 'box has also been usefully slickened. The transmission's default 50/50 torque split and viscously coupled centre differential remain unchanged, but the WRX now has a limited slip diff in the rear axle as well. The electronic brain controlling the distribution of all the power is, as usual, more technically and unfathomably advanced than ever, but on the open sweeping roads of the test route the WRX would settle into deliciously easy slides over the patchily damp roads. A tiny lift gets the nose turned in and then it's full on the throttle to let the car drift neutrally from apex to exit. You don't need to understand electronics to know that it's confidence inspiring in the extreme and huge fun. The Impreza's new grille is described as being winged, with the central nostril representing the cross section of an aeroplane's fuselage, while the lights are known internally as hawk-eyes. Despite this, it actually looks rather good, restoring a bit of purpose and distinction to the face. Also welcome are the high-intensity headlamps at the front, along with smaller, more powerful projector-type fog-lamps, but the 3D-effect light clusters at the rear look a touch aftermarket. Inside, the Impreza receives the improved interior from the Forester and Legacy, which means it's not exactly remarkable for its design and quality, but is a whole lot better than the bargain-basement Subaru interiors of old. For an additional £1500 you can have an SL pack, which includes a full leather interior, heated front seats and a sunroof. On the subject of style, it seems to me that there's an increasingly strong case to be made for the five-door WRX. When even the base, normally aspirated, 2-litre Impreza saloon plays up to its rally connections by wearing a not inconsiderable wing, you have to wonder if Subaru has taken the sporting pretensions a little too far. By comparison, the five-door WRX 'wagon' hardly lacks a sense of purpose and seemingly suffers little or nothing in terms of performance or handling, yet it doesn't shout 'I want to be a rally driver'; all the better for playing Peter Parker to the STi's Spiderman. Back in the mountains, the WRX's improved torque spread means that it gets into its stride from about 3000rpm. With thrust being available so early and grip so prodigious, the WRX is able to spit itself out onto the straights with enough vigour to stay in touch with the 50bhp-more-powerful STi. It helps that through the blind corners the leading STi can't commit fully and make its power advantage count for more, but it's impressive nevertheless. Ultimately the STi gives the bigger visceral tingle. But you'd pick the £6K cheaper WRX precisely because you don't want every trip to the shops to feel like a special stage. And yet when you did find yourself on the Col de Vence you'd still be able to play at being Petter - and not be left lagging behind.