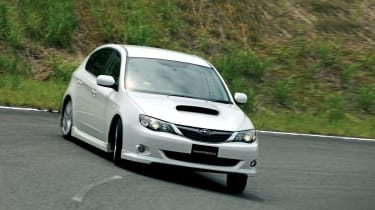 So, do you want to know what you’re missing out on? That’s right, the turbocharged WRX pictured here is not headed for the UK. I know, I know. In its wisdom, Subaru has decided that the WRX will go to the US, Japan and Australia but not Europe. Fuel economy and emissions concerns seem to have outweighed the fact that the WRX currently accounts for more than half of all Impreza sales in the UK. Let’s have a look, then, at the car we are being denied and the prospects for the more powerful WRX STI version that we will get, in 2008, some months after the ‘cooking’ versions go on sale this September.

In the metal as in photos, the WRX is no beauty, looking like a cross between a Corolla and a 1-series BMW (and rather like a Saab in waiting…). While the C-pillar and tail-light treatment are well executed, the only radical aspect to the bland front end is how comprehensively it departs from previous Subaru styling. Ask the designers why and the reasons for the nondescript looks become clear: Subaru wants to tone down the current car’s boy-racer image and appeal to a wider audience with more mature styling, better interior quality and improved packaging. And by early 2009 we can expect a turbodiesel-powered Impreza, as Subaru is eager to drop flat-four diesels into the Forester and Impreza soon after the Legacy gets the company’s first oil-burner next summer.

Even the signature WRX bonnet scoop is more subdued. The intake has been shifted forwards by around 150mm to give drivers a clearer view ahead and more importantly improve airflow to the intercooler. Lowering that bulbous scoop is one way to tone down the car’s youthful aggression, and the focus on toning down spills over into the performance.

Subaru feels the car already has the grunt and grip levels it needs, so current owners expecting hefty power-gains will be let down. The car we drove in Japan was the domestic-spec 2-litre flat-four turbo, generating 248bhp at 6000rpm and 246lb ft of torque at 2400rpm. Based largely on the current Legacy’s 2-litre boxer, the WRX version is fitted with revised intake ports, a remapped ECU, more efficient combustion chambers and a significantly modified AVCS twin-scroll turbo.

While that combination generates almost identical power and torque to the outgoing model, over 95 per cent of peak torque arrives at just 2400rpm. As a result, the gee-whizz factor has fallen a few notches. Meanwhile the export-specification WRX will have the bigger 2.5-litre boxer turbo, but less highly tuned, developing a more modest 225bhp.

Sure, the car performs well, but with the turbo tuned for smooth, progressive torque from down low, the WRX lacks the explosive nature of the previous version and is a more mellow machine. Under full acceleration it’s still quick, but when compared with its predecessor it feels as though the volume has been turned down, and not just because the car is now quieter inside thanks to better sound insulation. It still sprints from zero to 60mph in under 5.5sec, but the whole process seems more reserved, more like a 400m sprint than a 100m dash.

Bolted to that 2-litre turbo is a carryover five-speed manual transmission, with double-cone synchro in the first three gears. It is precise, notchy and does the job admirably.

The performance may feel toned down but the WRX chassis has lost none of its magic. In fact it gains extra compliance thanks to some trick rear geometry. The key change to the car’s chassis is its redesigned rear suspension, which now employs a more compact double wishbone setup that generates a far more comfortable ride while permitting class-topping rear luggage space.

This revised setup also allows the car to stay flatter in corners, responding more cleanly to direction changes thanks to its improved composure. On 17in wheels with 205/50 R17 Bridgestone rubber, it soaks up bumps and offers greater stability than any Impreza before it. The steering ratio is quicker, with good weight, and the car turns in sharply with almost no understeer. But as the picture shows, the rear will still slide if provoked, and the car has such poise that minor inputs of opposite lock and throttle are enough to balance it beautifully.

The familiar four-wheel-drive system with its viscous LSD, which sends torque where it’s needed most, is complemented on our test car by optional VDC (Vehicle Dynamics Control), an electronic traction control system. The combination works brilliantly to keep a precise line through quick corners; just why Subaru doesn’t make VDC standard on all quick Imprezas is a mystery. The brakes, meanwhile, have been downgraded from the four-pot variety of the previous WRX to a two-pot floating calliper setup, but still appear to deliver more than adequate stopping power.

Inside, higher-quality materials are used throughout. The design is similar to that of the Tribeca, with a swooping, V-shaped facia highlighted by polished aluminium inserts. The steering now features tilt and reach adjustment, making it easier to tailor your ideal driving position (the turning circle is smaller, too). And with far less intrusion into the luggage bay from the rear suspension, the hatch will now gobble up two large suitcases.

The WRX is still a real drivers’ car. You can’t argue with that superb chassis and the power of the turbo engine. It might not look as aggressive as before, but thanks to its upgraded interior materials, greater space and improved ride quality, the WRX may just appeal to the new group of buyers Subaru tells us it is aiming to win over.

All of which is of little comfort to current WRX owners in the UK and Europe who will have nothing to upgrade to until the feistier – and more expensive – STI version breaks cover next year. And the STI will have to be quite some machine to stop Scooby fans from defecting to the Mitsubishi camp and the aggressively styled, hard-hitting Evo X…