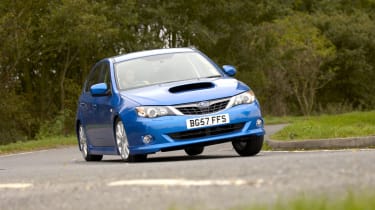 The Subaru Impreza WRX has always lived in the shadow of the full-house STI’s enormous rear wing; a bit softer, a bit slower, a whole lot less exciting. Or at least that’s what you might think. In fact its muscular (rather than explosive) turbocharged flat-four, supple set-up and more neutral, predictable balance have often meant that the WRX is the quicker, more confidence-inspiring car when a road turns nasty. It’s the thinking man’s Impreza. At least, it used to be…

First impressions are everything, and the new WRX doesn’t make a great first impression. It’s a frumpy, bland, awkward lump of a car, an effect that’s magnified if you’ve just been looking at the purposeful, taut STI. It’s not much better inside, either, but it could at least help fool your partner into thinking you’ve finally grown up and bought a nice sensible family hatch.

Lurking under the mumsy sheet metal is the traditional WRX hardware: the 2.5-litre turbocharged flat-four tuned to produce 227bhp at 5200rpm and a solid 236lb ft at 2800rpm, and the four-wheel-drive system with its torque-split set at 50:50. Subaru claims a top speed of 130mph and a 0-62mph time of 6.5sec.

In terms of price it’s as near as dammit Golf GTI money: £19,995 plays the VW’s £20,607. I mention the Golf, because of its obvious rivals the WRX feels closest in spirit to the VW. It’s very refined, with a great ride and an uncanny ability to soothe away craggy surfaces. However, even at a modest pace it’s immediately obvious that the WRX doesn’t have the Golf’s flat body control or efficiency of damping. There’s plenty of body roll and big undulations cause a disconcertingly floaty sensation as the suspension struggles to control the car’s mass.

This sense that the body isn’t quite as tied-down as you’d like is exaggerated by light, lifeless steering that always seems a few fractions behind what’s actually happening down at the wheels. You have to push through this uncertainty to discover that the WRX still has strong grip, excellent traction and a benign, mildly understeery balance.

The engine is still the WRX’s ace card, pulling clean and hard from 1500rpm. Work the mid-range and the WRX feels considerably quicker than something like the GTI or a Mégane R26. However, the engine’s strength unravels the chassis over tricky roads as rapid-fire bumps start to unsettle the Impreza, the body getting out of phase with the surface, the wheels pattering where you’d hope they’d be pushed hard into the tarmac. And when the suspension is struggling, the steering begins to kick back, the wheel shimmying in your hands and the power assistance becoming inconsistent – it feels like the pump can’t cope with the loads going through it. With all this going on, the WRX can feel quite ragged. That’s something you could never really say of the old car, and it’s a big disappointment.

There’s still plenty to enjoy here, though. The engine is smooth and powerful (although nothing like as responsive as the Japanese-spec 2-litre turbo unit), the five-speed ’box perfectly weighted, and the car is superbly stable on the brakes. Driven at seven-tenths it’s an extremely rapid ground-coverer, but up the ante and the WRX starts to wilt.

Rivals like the Golf GTI and Mégane R26 keep their composure much more assuredly under duress and are simply more fun. The Impreza would obviously have advantages in the wet, but I’m pretty sure that either hot hatch would pull steadily away on a tough stretch of road – particularly the incredibly grippy Mégane. That’s pretty hard to take if you’re a devout Subaru fan, but the simple truth is that there are faster, more exciting cars than this at similar money.