A true successor to the McLaren F1, Gordon Murray Automotive has revealed further information about its spectacular T.50 hypercar

Gordon Murray Automotive (GMA) has released a video of the engine destined for its T.50 hypercar revving to a staggering 12,100rpm, albeit running on just three cylinders. Late last year, the brand confirmed that the ‘son of F1’ would be revealed in May 2020, with cars reaching customers from 2022.

Unlike many of its hypercar rivals, such as the Lotus Evija and Pininfarina Battista, the T.50 boasts a naturally aspirated V12 engine developed by Cosworth, powering the rear wheels via a six-speed manual transmission. It’ll also seat three, with the driver commanding a central driving position in front of a ram air engine intake. Sound familiar?

Visit the new Gordon Murray Automotive website to learn about the 3-cylinder development engine and its progression to...

But the T.50 isn’t devoid of innovation, as it will combine cutting-edge ground effect active aero, a newly announced 48V mild-hybrid system boosting power, and the latest innovations in carbonfibre material development to keep the overall weight to 980kg – quite an achievement in 2019.

Though a full reveal is still to come, GMA also revealed an image of the T.50, with a rear-quarter rendering giving our first look before the full launch in May. Straight away, parallels can be drawn to the F1 in the roof and door structures, but from there the T.50’s relative simplicity in its bodywork and purity of detailing is obvious. The rear is dominated by the fan, which together with movable aerofoils on either side give the T.50 a unique rear aesthetic. The exhaust outlets are also placed high up toward the foils, leaving the diffuser section free of any airflow-corrupting exhaust gases.

A total of 100 units will be built commencing in 2022, priced from £2million before local taxes or charges. Given the McLaren F1’s reputation, it’s not surprising to hear that a majority of the build run has already been allocated, with a strong reception from Japan and the US. Below we go into further detail of why the T.50 might just be the ultimate driver’s hypercar – ever. 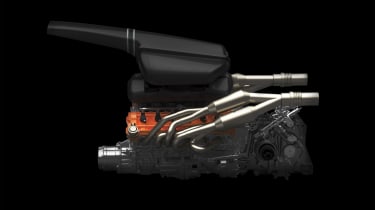 The engine is bespoke, and will be designed and produced by Cosworth to a specific set of benchmarks set by GMA. The 65-degree V12 will be naturally aspirated, displace 3980cc and rev to 12,100rpm (1000rpm more than the 6-litre unit being developed for the Aston Martin Valkyrie, also by Cosworth). The power unit will be rigidly bolted to the rear of the carbon tub and will act as a stressed-member part of the chassis, much in the same way as a Ferrari F50’s engine.

The car’s electrical make-up will utilise a 48V system, forming a type of mild-hybridisation that not only powers the T.50’s rear-mounted fan and active aero, but will also provide a subtle 30bhp boost in certain aero modes, building combined power to 700bhp. This extra boost will come from a small electric motor, which also acts as a starter motor and generator.

The six-speed manual gearbox is another bespoke commission, this time designed and built by XTrac. As in the McLaren F1, the traditional manual gearlever will sprout from a console to one side of the centrally mounted seat.

The GMA T.50’s unique aerodynamic package comprises a combination of elements derived from Gordon Murray’s Formula 1 cars as well as the latest developments made in both modern-day F1 and road car development. Dominating the package is that rear-mounted 400mm fan, which rapidly accelerates the air passing under the car and out of the rear diffuser.

This is combined with a selection of movable aero devices that sit on the T.50’s underfloor, inside the rear diffuser and at the leading edge of the rear end. The underfloor ducting, together with the fan’s unique design does away with the need for the air ‘skirt’ found on Murray’s F1 cars, while also doubling as further cooling for the mid-engined V12 when required.

In order to take full advantage of the variability of the aero package, the T.50 has a total of six different aero modes, two of which are automatically deployed without driver intervention, and the other four being selectable. Auto Mode is the default, making the system variable in response to driver inputs, while a Braking Mode then activates under heavy braking, lifting the aerofoils and operating the fan at high speed, doubling downforce, therefore enhancing the tyres’ purchase on the road surface for the most effective braking performance.

The four further modes include High Downforce Mode for fast road or track driving by activating the fan and aerofoils. This improves traction and high-speed cornering grip, raising downforce over the default mode by 30 per cent. Streamline Mode reduces drag over the default mode by 10 per cent for high- and low-speed cruising, and closes all the underbody ducts and activates the fan at high speeds to extend the trailing wake of air behind the car, in effect creating a virtual long-tail.

VMAX Mode shares this slipperiest of set-ups with Streamline Mode, but adds a further 30bhp of electrical power from the integrated starter-generator to the V12’s crank for up to three minutes, raising peak power to 690bhp.

To validate these modes, GMA has partnered with the Racing Point Formula One team in Silverstone as it moves from virtual to physical testing inside Racing Point’s wind tunnel. The first quarter of 2020 will also see the opening of the Gordon Murray Automotive customer experience and service centre, which will sit alongside the company’s new headquarters and manufacturing facility, which will commence building cars in January 2022.