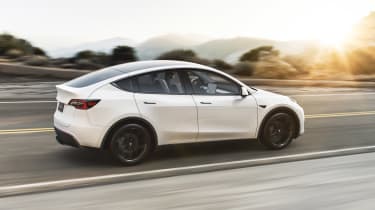 First announced on Twitter in late 2015, the Tesla Model Y mid-sized SUV has finally started to find its way into the hands of American owners, surrounded by the sort of hype we’ve come to expect since the launch of the brand’s existing Model S, Model X and Model 3.

With a slightly longer wheelbase by a scant 15mm for the Model Y, there’s not a huge amount of difference in the two cars’ interior dimensions, although it does appear that the Model Y offers rear-seat passengers an additional 135mm of legroom while being virtually the same in other respects. The SUV style does endow the Model Y with a much larger carrying capacity – 1925 litres when the seats are folded, making it slightly more capacious than a BMW X5 – but Tesla doesn’t give figures for capacity with the seats up, which makes further comparisons difficult.

The Model Y is significantly heavier than a Model 3, with the Long Range Dual Motor version tipping the scales at just over 2000kg, 156kg up on a Model 3 with the same battery and motor configuration. Like other Tesla models the Model Y can be ordered with different battery and motor combinations, although currently the only two models are the Long Range and the Performance, which both use the same hardware. The Standard model, with a lesser range and less accelerative capabilities, will be available in 2021.

The top-of-the-range Model Y Performance will sprint from standstill to 60mph in a quoted 3.5sec, just 0.1sec slower than an equivalent Model 3, while top speed comes in at 150mph, just 5mph slower than the Model 3 Performance. The Long Range Model Y completes the 0-60mph sprint in a still rapid 4.8sec but has a lower top speed at 135mph. Their ranges (according to WLTP estimates) aren’t significantly different, though, at 298 and 314 miles for the Performance and Long Range respectively. Elon Musk claims that while offering mid-sized SUV practicality, the new model would handle ‘like a sports car’. We’ll have to see about that...

According to Tesla there’s space for seven adults with luggage if buyers specify the optional third row of seating (at a not insignificant $3000), as thanks to the lack of an engine, more storage space in the front is available. Given the rake of the Model Y’s rear screen, any adults in the third row would probably have to be at the lower end of the height spectrum. As found in the Model 3, a panoramic glass roof aims to offer an enhanced sense of space, and the same, single 15-inch touchscreen is the control hub for the car. Also like the Model 3 is the way in which you can use your smartphone as the car’s key.

All Model Y cars will be compatible with the brand’s Supercharger network, including the new V3 Superchargers capable of offering up to 1000-mile per hour charging speeds. However, unlike the Model S this will not be free, with customers paying on a cost per charge basis.

Deliveries have now commenced in the US, with the RWD Long Range model set to start in the autumn and the Standard Range due in the spring of 2021. UK pricing and release dates have yet to be announced.