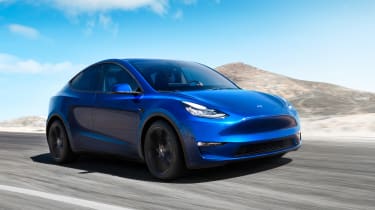 First announced on Twitter in late 2015, the Tesla Model Y mid-sized SUV has finally been unveiled to the world, sitting alongside the Model S, Model X and Model 3 in the brand’s current lineup.

Sharing clear similarities to the Model 3, the Model Y is around 10 percent larger and will offer slightly less range from the same battery. Tesla CEO, Elon Musk, announced that the car would start at $39,000 for the Standard Range model, just $4,000 more than the base Model 3 - Long Range, Dual-Motor all-wheel drive, and Performance variants will also come.

The brand claims the model has space for seven adults with luggage if buyer specify the optional 3rd row of seating, as thanks to the lack of an engine, more storage space in the front is available. As found in the Model 3, a panoramic glass roof aims to offer an enhanced sense of space and the same, single 15” touchscreen is the control hub for the car. Also like the Model 3 is the way in which you can use your smartphone as the car’s key. 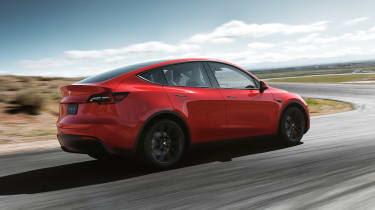 The top-of-the-range Model Y Performance will sprint from standstill to 62mph in a quoted 3.6secs, just 0.1sec slower than an equivalent Model 3 - top speed comes in at 150mph, just 5mph slower than the 155mph of the Model 3 Performance. Elon Musk also claims that while offering mid-sized SUV practicality, the model would handle “like a sports car”. We’ll have to see about that...

Range for the base model is quoted at 230 miles, with the Long Range sporting a 300-mile range on a single charge. All Model Y cars will be compatible with the brand’s Supercharger network, including the new V3 Superchargers capable of offering up to 1,000-mile per hour charging speeds.

The car’s presentation had an emphasis on safety, with Musk stating that it had large crumple zones, a rigid body and a low centre of gravity to keep occupants safe. With the Model 3 earning five star safety ratings in the US, we’d imagine the Model Y won’t be much different.

Deliveries are set to begin in the autumn of next year for the top-of-the range Model Y Performance, Long Range rear-wheel drive, and Dual-Motor all-wheel drive variants. The base, $39,000 model is due to come in Spring of 2021. UK pricing and release dates are yet to be announced.

Powered by an Audi-derived 600bhp five-cylinder, the KTM X-Bow GTX will compete in the GT2 racing series
Visit/features/22907/hyundai-i30-fastback-n-versus-the-col-de-turini