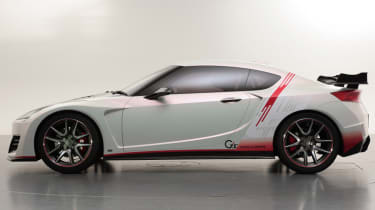 Remember the Toyota FT-86 concept car unveiled last year? Well even before its official release, here’s a hot tweaked one to whet your appetite.  Toyota is set to release a number of tuned cars in the next few years, in conjunction with its new racing partner, GAZOO. The cars will sport the name ‘G Sports’ (not spots, those of you with active imaginations), and the FT-86 gets the first crack of the whip.  The ‘86 gets a host of modifications and honestly wouldn’t look out of place at any drift event you wish to slide in to. Lucky it’s rear-wheel drive, then…  A carbonfibre bonnet with deep vents, wide-body aero kit with massive rear wing and staggered 19in wheels are a hat-tip to Japanese car culture, and help push this car for tuning favourite status even before its release. Its ancestral AE-86 would be rather proud.  The now legendary Subaru flat-four boxer engine makes an appearance, and so does a turbocharger. Figures and prices are only speculation right now, presumably because the standard car hasn’t seen the light of day yet. Expect a release some time in 2011.