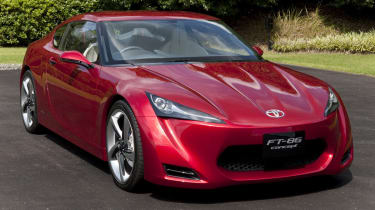 An old Japanese favourite looks set to return. This is the Toyota FT-86 Concept, a hark back to the rear-wheel-drive Corolla AE86 of the mid 1980s.

Once again, the power is sent to the back, its source being a Subaru 2-litre boxer engine. While power and performance figures haven’t been released, an Impreza with the same engine has 148bhp and 145lb ft on tap, sending the 1345kg hatchback to 60mph in 9.2sec.

Expect much sprightlier acceleration from the FT-86, though, which is set to focus on weight-saving and optimised aerodynamics, with the engine mounted as low as possible up front to keep the centre of gravity down.

It certainly looks the part, in concept form at least. It looks every inch the baby LF-A, a scaled down supercar and the dose of excitement Toyota’s range craves. It should be a more than able competitor to the VW Scirocco, Volvo C30 and the rest of the small coupe class.

Fingers crossed the styling doesn’t change too much should the FT-86 make the transition to road car. The same probably can’t be said for the interior. Impressive as it is, it’s unlikely we’ll see zipped leather dashboards and those striking seats on a production-spec budget coupe.

Should it get the go ahead (and we’d be surprised if it doesn’t), expect FT-86 sales by 2011 and a price tag to rival its circa £20K rivals. The concept will be shown at this month’s Tokyo motor show, where Honda’s rival CR-Z coupe is also on show.Follow evo on Twitter for the performance car latest