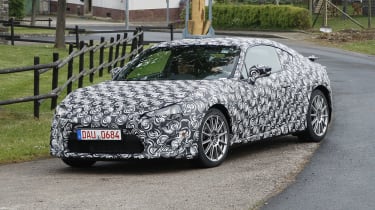 The Toyota FT-86 has been spied undergoing development in Europe. The long-awaited rear-wheel drive coupe was testing at the Nurburgring with its final design camouflaged.

We’ve been teased by FT-86 concepts for nearly two years now, but with the FT-86 II Concept revealed earlier this year at March’s Geneva Motor Show, we can expect a production car come next spring.

As the successor to the fabled ‘Hachiroku’ AE86 Corolla, this car means a lot to fans of the old Corolla and should entice a new generation to the appeal of a simple rear-wheel drive coupe.

Subaru will produce both its and Toyota’s version. The pair should differ in the design of their grilles, wheels and interior and are expected to have different suspension settings. The familiar 2.0-litre flat-four Subaru motor will be naturally aspirated, with around 200bhp predicted.

Prices are set to kick off at around £17,500 in Japan, rising past £20K for top-of-the-range models, which will feature stiffer suspension and Brembo brakes. Let’s hope they all come with an LSD…