Seeking respite from clogged UK roads, we find solace in the freedom and isolation of California's El Mirage lake bed 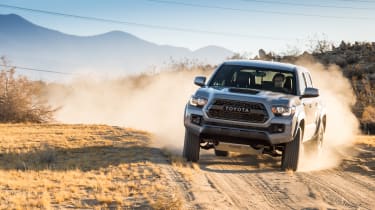 Test number one: Speed. El Mirage is over six miles long from tip to tip, and around two miles wide. It’s also very flat and has a hard, sun-baked surface. And good visibility, so you can pretty much point your nose to the horizon and go. The Tacoma shifts clumsily down its six-speed automatic transmission, clears its lungs and emits a guttural bellow from the TRD exhaust as it heads for the red line. Each shift is slurred like slushboxes of old, but the pace is definitely increasing. Top speed in the brochure is a limited 113mph; I lift off at a nice, round 100mph on the dial, followed by a mile of fine dust that’s almost certainly ruined the backdrop for the handful of people making what appears to be a low-budget music video.

Yumps next. The one thing we can’t find at El Mirage are proper rolling dunes, so we scout the small, sandy speedbumps that line the lakebed for potential air-worthy candidates. Photographers love jump shots whether you’re testing a Kia Picanto, a 918 Spyder or a two-ton truck. My first attempt is little more than an uncomfortable thump, but the next is much more promising. Bit of a ramp on both sides, decent height. The TRD’s definitely getting air on this one, but Aston isn’t happy. ‘Faster, Ingram’, he says. 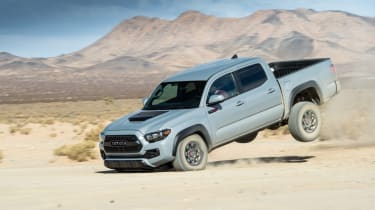 Faster, Ingram goes: I sink Converse to carpet and hit the ramp with a good 10mph more on the clock than last time. The front gets air, pointing the nose skywards, but then the back wheels hit the ramp and send the nose quite rapidly down. Sand replaces sky and I land with a sickening shudder. It’s enough to have set the wipers going by themselves, but a few exploratory wiggles of the steering suggests everything is still functioning.

I loop around to Aston, doubled with laughter as he shows me an image that will no doubt define my career at evo: front wheels tucked into the arches, skid plate on the dirt, and back wheels a startling distance off the ground. Remarkably, the only visible evidence of the landing is a scuffed skid plate. A BMW X5 would probably have set off all its airbags and auto-dialled for emergency assistance.

We try something a little closer to terra firma. One, solitary hillock standing proud of the surrounding bush looks inviting. Until we get close, that is. The damn thing looks a hell of a lot steeper than it did from half a mile away. Let’s be methodical: Clunk transmission into four-wheel drive, low range, engage the rock-crawling mode, foot off the brake... and up she goes, accompanied by the chunter and chatter of the ABS grabbing individual wheels to maintain traction. I’m feeling quite proud of myself until it gets even steeper and I chicken out, but plans to fake the top-of-the-hill pictures and reverse back down are dashed when a couple of locals pile up the hill behind me at about eight times the speed I crawled up and park immediately behind. Bugger. 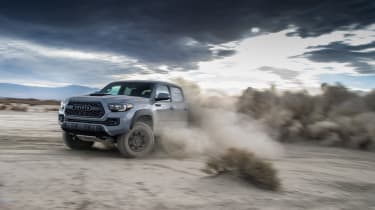 Thankfully, they’re able to direct me to the top (‘Left a bit, you’ll clear that rock, give it some gas’), I thank them, and they say ‘no problem’, graciously pretending I’m not the most pathetic “four-wheeler” they’ve ever seen. One does take an interest in the truck - he currently drives a battleship-grey Toyota FJ Cruiser on huge tyres, and is looking to trade soon. He also tells me that El Mirage is just one of dozens of off-road playgrounds in the area, before roaring off down the hill again and shrinking to a spec in the distance.

By now the sun is sinking and I’m seeking a different, more traditionally evo kind of thrill. Lining sections of the lake are gravel roads and firm dirt trails, pockmarked by bushes and small dunes. To any self-respecting petrolhead, the rally stage builds itself. There’s just one problem: while I’m back in rear-wheel drive, the traction control won’t fully disengage. Long, trophy truck-style skids are not there for the taking. But at low enough speeds the electronic nanny’s back is turned and I send thick clouds of ultra-fine dust into the sky as the ‘Yota slews sideways. It feels hilarious, perched so high and throwing armfuls of lock at every slide. Might be the most fun I’ve had all day. Maybe all year.

And the best thing? There’s nobody around to witness, nobody to disturb, and nobody to push passive-aggressive notes through your letterbox. Fifteen bucks doesn’t buy a lot these days. But it can buy you a few hours of blissful, automotive isolation.