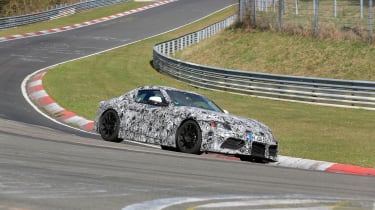 Toyota is getting ready to re-launch its iconic Supra nameplate to sit on the tailgate of an all-new sports car. Expected to arrive in 2018, the new flagship Supra will share a platform with the upcoming BMW Z4. We’ve spotted the car testing on the Nurburgring in heavy camouflage.

Even decked out in a camo wrap, the overall shape of the Supra is impossible to hide – long and low, with a classic sports car silhouette in the same vein as the Toyota FT-1 concept seen previously. It also shows off a ducktail spoiler on the boot lid. 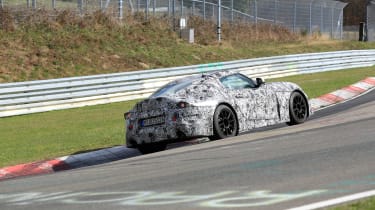 It will sit above the GT86 in Toyota’s sporting lineup, but is unlikely to share much with that car. Instead, the Supra will make use of BMW’s technology. As evo exclusively reported in March, the two Toyota sports cars will also be joined by a new Toyota MR2.

Sources report that the Supra will use a hybrid powertrain, consisting of a BMW petrol engine mated to electric motors. Those motors would reportedly store their energy in supercapacitors rather than batteries, however – giving the Supra a link to Toyota’s hybrid Le Mans efforts. A petrol-only model hasn’t been ruled out, and could use one of BMW’s straight-six engines.

Use of a hybrid powertrain would suggest that the new Supra will be automatic-only – a blow to enthusiasts. That’s not to say a manual transmission is entirely out of the question (Honda’s CR-Z, for example, championed the manual hybrid sports car) – but a spy shot of the car’s interior showed a BMW-style automatic shifter on the centre console. 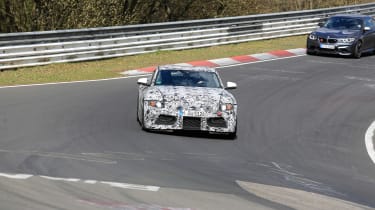 The interior shot also confirmed a large amount of BMW tech for the Supra’s cabin. Although heavily disguised, a large iDrive controller and screen is easily visible.

The new Toyota Supra is set to arrive in 2018, shortly after BMW launches its Z4 sibling. Will the Toyota-BMW partnership (named the Silk Road Project because of its East-meets-West approach) bear fruit? It’s not the first time the brands have worked together, having shared diesel engine tech across the Toyota, BMW and MINI brands for several years as well as collaborating on hydrogen fuel cell tech. We look forward to seeing if the Silk Road Project can produce a convincing successor to the iconic Supra.