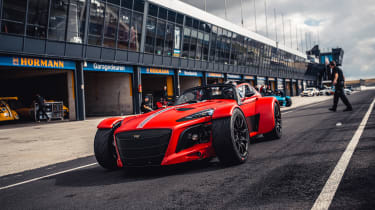 Dutch sports car manufacturer Donkervoort has revealed an extreme track-only flagship called the D8 GTO-JD70 R. Designed to be the ultimate supercar killer on track, the JD70 R’s huge power-to-weight ratio and focus on sustained on-track performance make it a compelling, if curious take on the lightweight sports car.

Like the standard JD70, power comes from an Audi-sourced 2.5-litre in-line five cylinder engine producing 415bhp and 384lb ft. While the engine itself hasn’t changed markedly from the units found in the RS3 and TT RS, the 725kg car it’s attached to is rather different, being based on the same tubular steel chassis inherited from the Lotus Seven, but then wrapped in structural carbonfibre panels which also give it those distinctive looks underpinned by those familiar proportions. 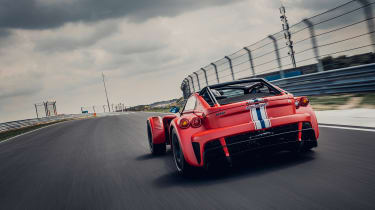 As a result, the JD70 R’s power-to-weight ratio sits at a remarkable 572bhp/ton, 34bhp/ton more than the Ariel Atom 4 and just 8bhp/ton less than the most potent Caterham 620R Superlight. Performance is impressive as a result, reaching 62mph in 2.7sec and 124mph in 7.7sec. That’s half a second up on the Ariel Atom’s time to 62mph and a single tenth faster than the 620R, while being only a few tenths behind some of the fastest accelerating cars on sale.

Power is sent to the rear wheels, naturally, via a new six-speed sequential transmission sourced from Quaife replacing the standard JD70’s five-speed manual. The new transmission does yield a 15kg weight penalty, but it was rationalised as a worthy compromise considering the extra performance it would bring to the package on a circuit. The ‘box is also capable of flat upshifts and there’s an auto-blip function in there too. Both the limited-slip differential and prop shaft have been reinforced to suit. 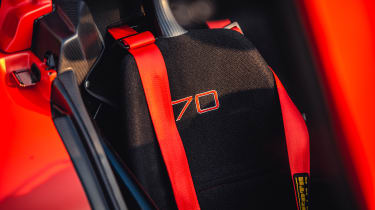 Suspension is double wishbone all-round, with new four-way mechanically adjustable dampers and bespoke coils fitted, giving the driver the ability to tailor the setup to different tracks and surfaces. The anti-roll bars front and rear are also new adjustable units, and the bushes are also stiffer than the road car’s.

The braking hardware is identical to the standard JD70, consisting of 310mm front and 285mm rear wave-pattern steel discs, gripped by six-piston calipers front and rear (although the rear six-piston calipers are an optional upgrade). Pads and brake fluid are specific to the R though, and it also has an adjustable brake bias via a switch on the dash. There’s also a new Bosch ABS system fitted, which is 12-way adjustable allowing the driver to dial in the precise amount of assistance he or she wants during the course of a session. These sit behind a set of forged Rays wheels, but carbonfibre wheels are optionally available to cut back some of the R’s unsprung weight. Donkervoort offers two different steering racks, both now assisted with a racer-derived lightweight EPAS system. At its fastest the JD70 R’s steering ratio is a pointy 2.7:10. 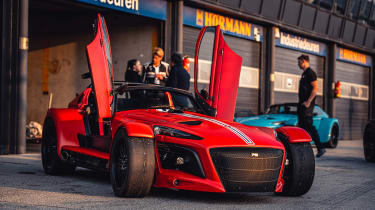 In the armed warfare between super lightweights the Donkervoort hits hardest. That is, however, before we take into consideration the small matter of cost. While £40,000 for Ariel’s superb Atom 4 might sound like an expensive toy, and the Caterham 620R’s £50,000 a steeper still, Donkervoort’s latest and greatest, which remember is no longer road-legal, will set you back closing in on £180,000, around £20k more than something like a McLaren 570S GT4, which isn’t just a track car, it’s a racing car. 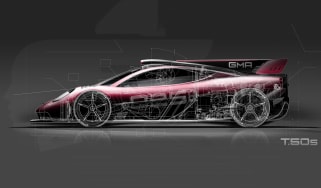