It’s that time of year again! The Nürburgring 24 Hours is upon us, and we're there for the show 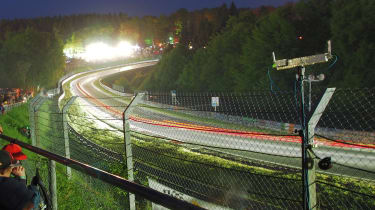 The Le Mans 24h has only just concluded, but one of the most gruelling, most difficult and most entertaining 24 hour races of 2019 is still to come. Every year, the Nürburgring Nordschleife hosts its round of the ADAC Nürburgring 24h, on a racing circuit that makes Le Sarthe look like a o-kart track.

In 2019, the Nurburgring 24 Hours will run as it has for nearly 50 years on the Nordschleife, or north loop, with over 200 cars and 700 drivers all vying for ‘Green Hell’ glory.

The race is officially called the ADAC 24h Rennen Nürburgring and we’ve been lucky enough to not only attend but also compete in it over the years. This year we’re there in force once again, so keep reading below for a brief overview of the Nürburgring 24 Hours race, as well as a live twitter feed with all the latest over the racing weekend.

A brief history of the Nürburgring 24 Hours

The Nürburgring 24 Hours as we know it first appeared on the motorsport calendar in 1970, organised by the ADAC, or the Allgemeiner Deutscher Automobil-Club, if you want to be specific. Before 1970, endurance racing events on the Nürburgring were far more sporadic, made up of 12, 24, 36, 84 and even 96 hour events that were not overseen by a single governing body.

Today, the race is held on the Nordschleife, or north loop, integrating the GP circuit on its southern edge. The Nürburgring itself might have a sinister reputation, but part of its difficulty is the varied weather conditions that tend to douse the track in rain, fog and sunshine in unequal measure, and often all at the same time on different parts of the track. 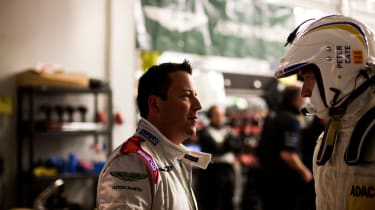 The cars that enter the race are just as varied as the weather conditions, ranging from factory supported GT3 entrants like the Audi R8 LMX and Mercedes-AMG GT3, right through to privateer cup-series hot hatches like Renaultsport Clio Cups.

Manufacturers have also been known to enter prototype versions of their new performance cars into the race, a notable example of which is the Hyundai i30 N, which raced last year, months before its introduction into the market.

The increasingly popular customer touring car, or TCR racing car is also becoming more common at the Nürburgring 24 Hours, with Hyundai, Volkswagen, Peugeot and Audi just a few of the car manufacturers producing race-ready touring cars for sale, which pass various racing series’ regulations and therefore are able to easily be entered into the N24.

It’s this variety, as well as the sheer number of cars on track, over 200 in fact, that makes up some of the magic of the Nürburgring 24 Hours. 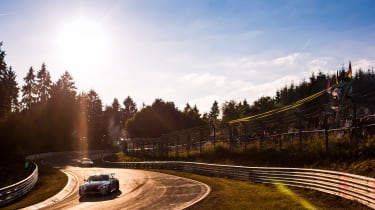 There is a tangible excitement when it comes to 24-hour endurance races, and the Nurburgring 24 Hours is no different. Aside from the racing, the journey to the track, party-like atmosphere and trackside camping (if that’s your thing) all contribute to the experience. Typically, there are hotels around the track for those who prefer Egyptian cotton and bathroom suites to quick-dry microfibre towels and a short walk in the woods, but whatever your preference or budget, the N24 is one of the truly great weekend experiences in motorsport.

Live from the Nürburgring 24 Hours

Check out our live trackside Twitter feed below, where we’ll try to bring you closer to the action...