Lighter than before and using torque vectoring tech - could the new Insignia finally become a driver's car? 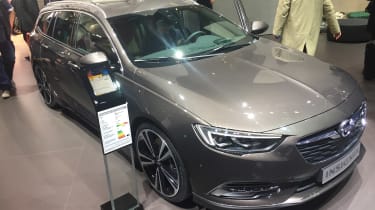 Vauxhall's latest Insignia has made its debut at the Geneva motor show. The Insignia Sports Tourer features a longer, lower design than the outgoing model, and its main technical highlights are torque-vectoring all-wheel drive and LED matrix headlights.

The former is effectively the same system used in the Ford Focus RS, and while we're not expecting RS-style excitement (nor a drift mode) from the Insignia Sports Tourer, it should help give the substantially-sized Insignia a nimble feel.

A pair of electronically-controlled multi-plate clutches replace a conventional differential at the rear, able to vary torque to either side of the rear axle - supplying more to the outside rear to quell understeer and aid turn-in.

Elsewhere it's the Insignia's "IntelliLux" matrix LED headlights that should bring the greatest benefits for drivers. Each lamp is comprised of 32 individual LED segments, able to adapt the light pattern according to the situation: the pattern can adjust to avoid dazzling oncoming traffic, as well as pointing through curves according to steering angle and providing 400m of spotlight illumination on high beam. 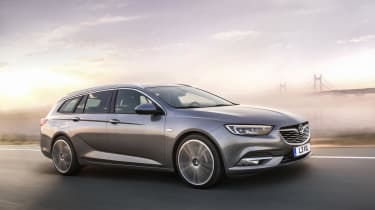 The headlight tech is joined by a head-up display, adaptive cruise control, lane keep assist and lane departure warning, an an active bonnet that raises in the event of a pedestrian impact.

The Insignia Sports Tourer's styling builds upon the sharp lines of the saloon. The work of British designer Mark Adams (who also penned the Monza Concept and the tiny GT Concept that appeared at last year's show) it's practical as well as sleek: with a maximum 1640 litres capacity, it packs 100 litres extra volume over its predecessor.

Despite the substantial size, new Insignia Sports Tourers follow the weight-loss trend slowly creeping across the industry, weighing up to 200kg less than the previous model.

The Sports Tourer made its debut at the Geneva motor show in March alongside the Grand Sport. You can read about more Geneva debuts on our dedicated hub page.