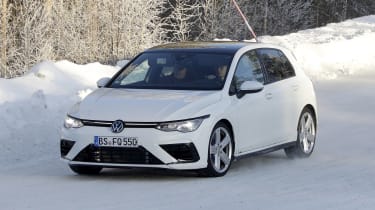 The eighth-generation Volkswagen Golf is just about to hit our roads, and as always, this means that performance variants won’t be far behind. We’ve already seen unofficial images of the middling GTI, and these recent photos have given us our first glimpse at the full-fat R.

Spotted almost entirely free of camouflage whilst undergoing cold weather tests, the Mk8 Golf R sports the changes we’ve come to expect from the range-topping hatch. A more aggressive front bumper with larger intakes, larger wheels to cover the uprated set of brakes, and a new diffuser to house the trademark quad exhaust tips can all be seen.

What lies under the bonnet is still to be confirmed, but despite the dawn of the hybridised performance car, an unassisted powertrain featuring the 2-litre turbocharged EA888 four-pot seen is most likely.

Volkswagen’s sales and marketing boss, Jürgen Stackmann, previously said that the next-generation Mk8 Golf R could be pushed to around 400bhp: ‘With a little more expressive design, R can go beyond the rational side of things. It [the R brand] can find its place in a different league of pure performance and there’s a space where customers are willing to pay a significant amount of money.’ 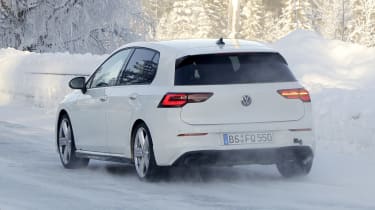 A recent leaked image posted to social media seems to suggest first cars won’t hit this, but a future inclusion of hybrid tech could push numbers higher. Though not confirmed by Volkswagen, the image disclosed a power figure of 345bhp for the Mk8 Golf R, up almost 50bhp on the current generation – this would put it just below the non-S A45, and above the current Audi S3.

The timeline for the performance Mk8 Golf line-up has already begun, with the 242bhp, plug-in hybrid GTE already out in the open. The GTI is set to be unveiled at the Geneva motor show in March alongside the GTD, with the range-topping R to come later this year with the GTI TCR.

The Mk8 Golf R will lead the charge in Wolfsburg’s new high-performance model line-up, with the R name expected to be seen on a number of new models over the coming years. Bosses have even confirmed the possibility of a hot version of VW’s new, all-electric ID.3. 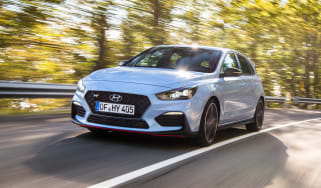