Volkswagen has told us that the next generation of its hot R models are about to get a jump in performance and capability, and will include a range of both SUVs and electric ID models for the first time.

Currently, the R treatment is only applied to the Golf and Scirocco (yes, it’s still on sale), but VW bosses have confirmed that the R treatment in future will not only spread to compact SUVs, the T-Roc and Tiguan, but also VW’s incoming electric ID range.

> Click here for our review of the Mk6 Polo GTI

VW has played its first hand at connecting the ID and R brands with the ID R Pikes Peak racer – an electric prototype racing car that VW has engineered to break the electric car record at the Pikes Peak event. The ID R will also form a basis of VW’s development of the next-generation electric World Rallycross car – a racing series it has also connected to the R branding with the Polo R WRX entry. 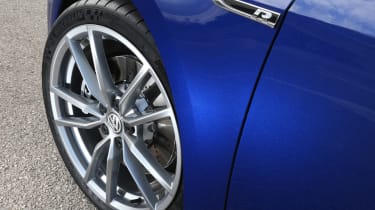 In addition to these new directions, VW sales and marketing boss Jürgen Stackmann has noted that the next-generation Mk8 Golf R, due early next year, could be pushed to around 400bhp, leaving plenty of space below for the GTI models to lift their power and capability. VW’s desire to push the Golf R beyond its current 300bhp level comes as cheaper, more mainstream rivals like the Hyundai i30 N and Peugeot 308 GTi creep closer to the Golf R’s performance levels at a lower price point.

Stackmann said: ‘With a little more expressive design, R can go beyond the rational side of things. It [the R brand] can find its place in a different league of pure performance and there’s a space where customers are willing to pay a significant amount of money.’

Beyond conventional models, VW also plans to expand the R brand into its future range of ID electric cars. ‘The ID R that we put into Pikes Peak shows that the R strategy needs a dimension on the electric world,’ Stackmann said. ‘It cannot stick to just conventional powertrain solutions – it is a new dimension to our brand.’

The Pikes Peak car develops 670bhp from an electric motor on each axle and shows ‘how powerful we can get with our MEB [electric platform] idea’ and ‘where can we take the R idea when it comes to the [electric] family,’ Stackmann told us.